There have been numerous reports and accusations that SWTOR is a WoW-killer. For many, it will be a good thing if it is. Some are tired of WoW and tired of WoW-clones. They’re looking for something new, something to make a big splash in the MMO scene and SWTOR claims to be it.
This article on Product-Reviews.net takes a look at this notion and whether or not SWTOR will really be a WoW-killer.
“Most gamers will agree that the notion of any such game being able to topple the might of Blizzard’s WoW will be like saying; the Mega Drive can compete with the PS3’s graphics. However, SWTOR has so much more to give gamers, more in fact than Wow, but there is still much more to consider. Gamerzitch has now weighed in on the argument saying that BioWare has developed a game that makes you feel important, but is that really enough to topple the fan base of Blizzard’s MMO?”
I don’t know. If any game could do it, I would think a story-driven Star Wars themed MMORPG by BioWare would be the very game to achieve such a feat. I’m not a WoW-hater. I’ve played since beta. I have a guild still actively seeking Firelands progression but a good lot of us are just waiting on SWTOR. We have our guild registered, our members signed up and most have pre-ordered the game already. To say we are ready is an understatement.
Will SWTOR achieve what it promises or will it let us down? The reviews goes more in depth on the claims:
“The reason we say this is because World of Warcraft currently has a user base of 13 million, this cult following will be tough to follow and even if those on the side of SWTOR must agree that it is a battle that will not be won. This is a shame; because The Old Republic has a lot more to give its users, the 1,000 hours of story is proof of this. No one will be able to say that BioWare has a pointless game here, as it is far from it.
It does not matter how much Star Wars: The Old Republic has to offer in way of gameplay, storyline or how differently it reacts when playing as a smuggler or Jedi, it will always come down to reach. But let’s think about this for one moment, as there is room for both. It does not matter if you want SWTOR because it is more for a single player or WoW because it excels in multiplayer, there will be times when you want the option for the two.”
All good points. I have yet to cancel my WoW subscription although I fully anticipate playing TOR. I still may not cancel my subscription but instead may fall to a more casual role in WoW if SWTOR is everything I believe it will be. Also, I still believe there will be some loyal WoW fans who stay. There is still a huge market there. Some people want to be casual, like what they know already and don’t want change.
Some people never played an MMORPG before- or since-WoW and they have no intentions of leaving.
What do you think? 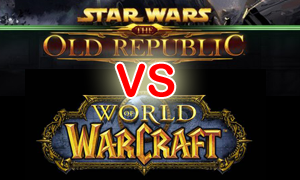