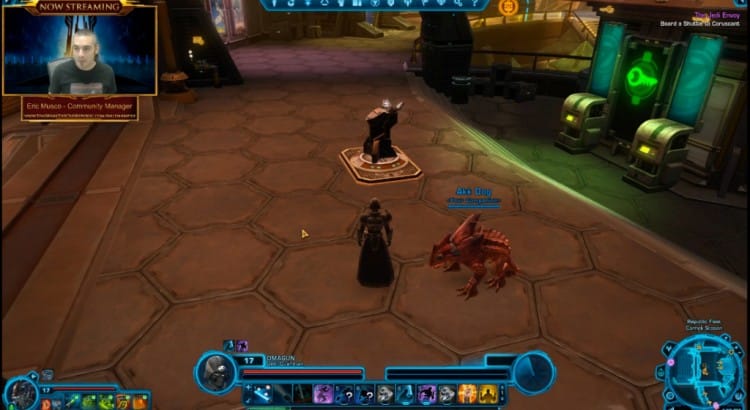 SWTOR Community Manager Eric Musco, just made an update about changes coming to BioWares Livestreams. Apparently the users over at the official Star Wars: The old Republic Forums, don’t like the story Livestream hosted by Charles Boyd. There for team is shutting it down and will try to do a vblog that will be hosted on youtube instead. Check out the full story below:

Thanks to all of you who have posted feedback on our Livestreams. Based on your feedback we have some changes planned.

The monthly Producer Livestreams, scheduled the second Thursday of each month have been well received as we are able to address community concerns and offer information into what is coming – so that is going to continue in its current form. The Story Livestream hosted by Charles Boyd, offers insight into the upcoming story chapters. Unfortunately, this is simply not working in the Livestream format. When you guys come to a livestream you are typically there for a few things; a dialog with us, answers to some of your questions/concerns, announcements around content, etc. The focus on sharing story insights just didn’t work in the interactive format of Twitch.

Based on this feedback, we are going to do away with the story livestream. In its place, the team is going to work on a vlog which will provide similar insights in a video format posted on our YouTube channel. This means that if you love getting that information, you will still get it! Plus, the Story vlog will now include gameplay footage and some “first looks” into the next Chapter. This may mean that Charles will crash Ben’s stream now and again to talk a little bit of story, but ultimately that insight will be moved to the video.

Again, thank you all for your feedback on our livestreams. Make sure you don’t miss our next Livestream, the March Producer Livestream, coming March, 10th on Twitch.tv/SWTOR. Thanks everyone!