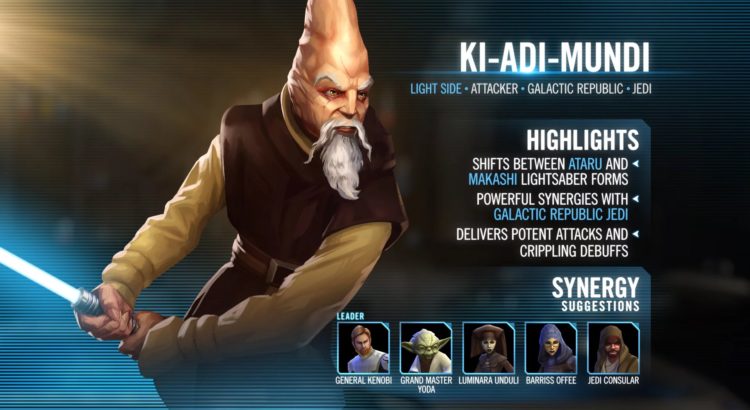 This week, They developers over at Capital games are discussing a particularly recognizable Cerean Jedi, Ki-Adi-Mundi The discussion goes about what’s going on in that big head of his and what we can expect this Jedi Master to bring to the holotables.
check it out:

Q: Who is Ki-Adi-Mundi?
CG_M: Most people probably recognize him as the Jedi Council member who asks, “What about the droid attack on the Wookiees?” in Revenge of the Sith but this character was given a much deeper lore and history outside of the main movies. He plays a significant role in the Clone Wars TV show, as a leader and mentor, and proves himself far more level headed than the rest of the Jedi by advising caution and reason in most dangerous circumstances.

Besides being a Jedi Council master, Ki-Adi-Mundi is known to be one of the top swordsman of the order and is incredibly skilled with a lightsaber. He is a master of two different lightsaber styles, Makashi and Ataru, which gives him lots of flexibility is combat.

Q: Why did we bring this character to the holotables now?
CG_M: The team has been focused on the Territory Battle on Geonosis and I wanted to design a character the community has been asking for that would tie into this era and this content. We decided he would be the light side equivalent to Wat Tambor and I knew from the start I wanted him to fit in with other Galactic Republic Jedi. That faction is in need of something new, particularly as several of their strongest characters have been pulled away to fit into new squads, so I designed Ki-Adi-Mundi to help revitalize the Galactic Republic Jedi squad.

Q: Where did you get inspiration for the kit and his personality?
CG_M: Ki-Adi-Mundi is the master of two styles of lightsaber combat and is never shown to favor one over the other. I wanted to dive into that aspect further with something similar to what we’ve done in the past with Commander Luke Skywalker. Mundi can also switch between stances but I wanted to push this system to the next level and provide whole new abilities and bonuses that activate when moving between stances.

He’s also a very thoughtful teacher and I wanted this to play into his kit, despite him not actually having the leader tag in game. Instead, he has the Jedi Council Master Unique, which strengthens Galactic Republic Jedi allies and acts like a leader ability without the need for him to be in the Leader or Ally slot..

Q: Why not make him a leader if that was his role?
CG_M: We have a ton of leaders for a Galactic Republic Jedi squad already and we wanted to make Ki-Adi-Mundi useful under the existing leaders like General Kenobi or Qui Gon Jinn. By not tying up some of his key power inside a Leader ability he becomes a lot more flexible in what teams you can or want to use him in.

Q: What makes Ki-Adi-Mundi unique?
CG_M: I mentioned the stance changes before but this character really shows off how powerful this mechanic can be. No other character changes their kit so dramatically when changing between “modes” or stances and we also gave him 2 separate idle animations. The character is granted 100% turn meter when switching stances so you can change and not lose your turn. However,changing stances does have a cooldown so you can’t infinitely spam this ability.

Q: How do his different stances impact your strategy in battle?
CG_M: As the battle progresses, which stance you choose will have a big impact on Ki-Adi-Mundi’s strategy. Ataru is great against tanks with lots of defenses. It provides the ability Ataru Lunge that can inflict Armor Shred and deal a noticeable amount of damage. It also provides +100% Offense, +20 Speed, and +30% Defense Penetration so it’s a great choice for dealing damage and finishing off opponents.

Makashi, on the other hand, provides 100% counter chance and will feel similar to the other master of this form, Count Dooku. Ki-Adi-Mundi gains protection from basic attacks when in this stance and can really turn the tide of battle against AoE attacks from the enemy. When switching to Makashi form, Ki-Adi-Mundi recovers 10% Protection and Taunts for 3 turns. This stance is clearly more focused on defense and himself alive.

Q: Does he prefer to be part of a Jedi or Galactic Republic squad? What squad does he work best with?
CG_M: He works well in a Galactic Republic Jedi squad as most of his abilities impact that faction directly and the squad receives some huge additional bonuses if all allies are Galactic Republic Jedi. A squad I used frequently while testing was General Kenobi as Lead, Ki-Adi-Mundi, and 3 healers: Jedi Consular, Luminara Unduli, and Barriss Offee. Grand Master Yoda is a great addition if you don’t have another squad that he fits into.