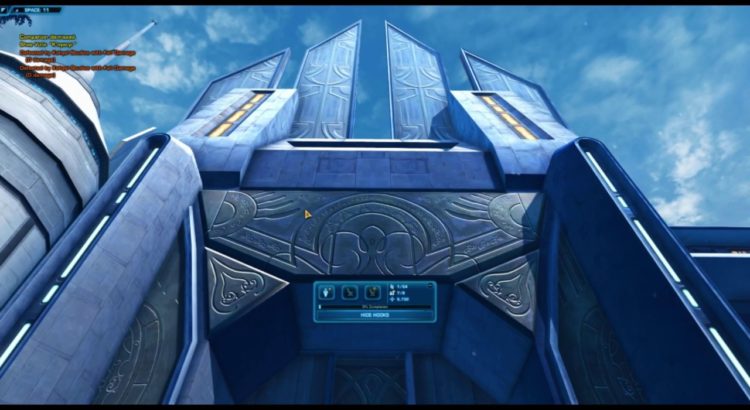 It’s no secret that the Alderaan Stronghold has been a highly requested addition, so the team was very happy to bring this to fruition with Game Update 6.1, ‘Pinnacles of Power,’ which went live earlier this month. To celebrate the release, we present a two-part conversation about the Alderaan Stronghold’s creation. A future interview will discuss the Stronghold’s functionality and design, but let’s get things started with our first interview, where we sit down with Mark Taylor and Emily Henderson to talk about the fundamental formation of the Stronghold!

Since this is our first time doing an interview with both of you, let’s do a quick introduction. Who are you, and what do you do on the SWTOR team?

Mark: I’m Mark Taylor, one of the Game Designers on the team. My role on the team includes Stronghold setup and creation of Stronghold Decorations, along with a variety of Cartel Market tasks such as Collections setup and more.

Emily: My name is Emily Henderson, I am an Environment Artist on SWTOR. I’ve been with this team for about a year. It’s my job to take the designers’ rough layouts of a level and build that into a beautiful player space, often referencing concept art and the player narrative. This involves building and placing assets from a library, as well as painting and forming terrain. Other than world building, I also work to make sure that our levels are within our performance budget for the best player experience on any computer.

Out of all the settings to pick from for the next Stronghold, what drew the team to Alderaan?

Mark: Alderaan was easily one of the most requested Strongholds from the community, so it made sense for it to be the next Stronghold we released. We were all excited to see a Stronghold that could combine all the different environments that makes Alderaan unique, as well as having the regal feel to it. Personally, I was excited about the imploding mountainside to unlock the Killik Caves area and how it turned out.

What was the process like for building this Stronghold from the ground up?

Mark: It started off as a side project for me last spring, something I’d work on when I had free time. Just working out the initial layout and trying to balance what looked good versus what was best for gameplay. As designers, we want to cram in as much fun content as we can; but Strongholds are a bit different in that we need to make them interesting, but still leave things “empty” for the player to customize themselves. For example, the valley area in front of the palace is really just a big, empty field. In a normal gameplay area, we’d be able to fill it in with trees, rocks, and maybe buildings to break things up. But in a Stronghold, these would just block player’s decorations. The compromise was using a river running through the field, as it doesn’t block the view of any decorations the player might place down while breaking up the monotony of an empty green field.

Eventually things progressed to a point where we looked it over as a team, and it was officially scheduled to be worked on. That’s when Ben, Skott, Emily, and the rest of the team came on to finish up. Some of our best ideas came up from random conversations, like “what if this mountain blew up?” or “a stained-glass window would look great here”.

Emily: Mark had a pretty good starting base for the stronghold so working from that was pretty easy. Beginning with that base I polished up the rock base for a more realistic landscape and natural structure. I then painted and sculpted the terrain with respective foliage to fill out the space. Building up the vistas at all viewpoints was the next mission and required careful placement of landscapes that felt real and logical. New ideas came in and were built upon constantly until we had something we thought the players would really enjoy. Two examples of this would be the balcony behind the throne room and the cave behind the waterfall. Both were suggested through tester feedback and prior forum discussion. We built upon these ideas until we had something that worked.

With the unique landscape of Alderaan, were there any challenges in balancing the different environments?

Emily: There are always challenges with giving the player the feel of a limitless landscape while actually limiting the landscape. We overcame this by opening vistas to long expanses of land and views of other mountain tops as well as giving the player large areas to run around and discover.

To wrap things up, what were each of your favorite parts or aspects of this Stronghold?

Mark: I love mountain views, so the different vistas are by far my favorite parts. I feel like the views are such a big part of Alderaan and it all turned out just as great as I’d hoped!

Emily: My favorite part of the stronghold is the secret cave behind the waterfall, because there should always be secret caves behind waterfalls. It was super fun to create and explore. I also really enjoyed making the balcony overlook and vista behind the throne room. Sometimes interiors can get claustrophobic and repetitive, so having that overlook really gives the player room to breathe. Plus, it’s a super sweet spot for an outdoor jacuzzi.

Thank you for your time, Mark and Emily! Later next week we’ll release the second part of this two-part interview where we talk to two other members of the team, Skott Bechara and Ben Brzowski. Stay tuned!