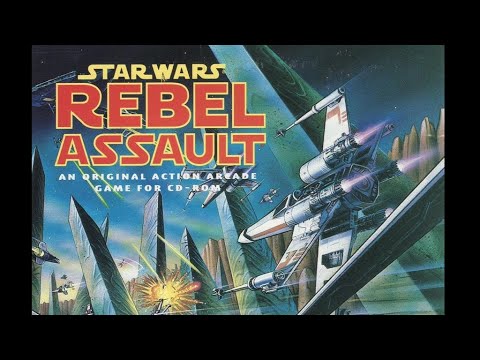 Star Wars: Rebel Assault is a 1993 rail shooter video game developed and published by LucasArts. It was released for the PC and Sega CD platforms, and is the first Star Wars video game to use full motion video (FMV) to present its story and gameplay.

The game’s story follows the journey of a young pilot named Rookie One, who becomes a member of the Rebel Alliance and fights against the Galactic Empire. Players control Rookie One through various missions, including dogfights in space, ground battles, and trench runs, as they progress through the story. The game also features live-action cutscenes with actors portraying the main characters.

Star Wars: Rebel Assault was well-received upon release for its immersive story, high-quality FMV, and challenging gameplay. It was also praised for its use of the Star Wars universe and its faithfulness to the source material.

One of the standout features of Rebel Assault is its use of FMV to present the game’s story and gameplay. This was a relatively new technology at the time, and Rebel Assault was one of the first games to utilize it extensively. The FMV cutscenes feature real actors portraying the main characters, including Mark Hamill as Luke Skywalker and Caroline Blakiston as Mon Mothma. These cutscenes help to immerse players in the game’s story and provide a sense of realism to the Star Wars universe.

In terms of gameplay, Rebel Assault is a rail shooter, meaning that players do not have complete control over the movement of their character. Instead, the game follows a predetermined path, and players must focus on shooting down enemy ships and avoiding obstacles. Despite the limited control, the game offers a challenging and exciting experience, with players facing off against waves of enemy ships and navigating through dangerous asteroid fields.

One of the key elements of the game’s story is the journey of Rookie One, a young pilot who becomes a member of the Rebel Alliance and fights against the Galactic Empire. Players follow Rookie One through various missions, including dogfights in space, ground battles, and trench runs. These missions are presented through a mix of FMV cutscenes and in-game action, with players taking control of Rookie One’s X-wing or other vehicles as they progress through the story.

In addition to its immersive story and challenging gameplay, Star Wars: Rebel Assault was praised for its use of the Star Wars universe and its faithfulness to the source material. The game features a number of familiar locations and characters from the Star Wars films, including the Death Star and Darth Vader, as well as new characters and locations created specifically for the game. The game’s music and sound effects are also authentic to the Star Wars franchise, adding to the immersion and overall quality of the game.

Overall, Star Wars: Rebel Assault is a memorable and enjoyable addition to the Star Wars video game franchise. Its use of FMV and immersive story, along with challenging gameplay and faithfulness to the source material, make it a standout title in the series. It is a must-play for fans of the Star Wars universe and for anyone interested in rail shooter games.