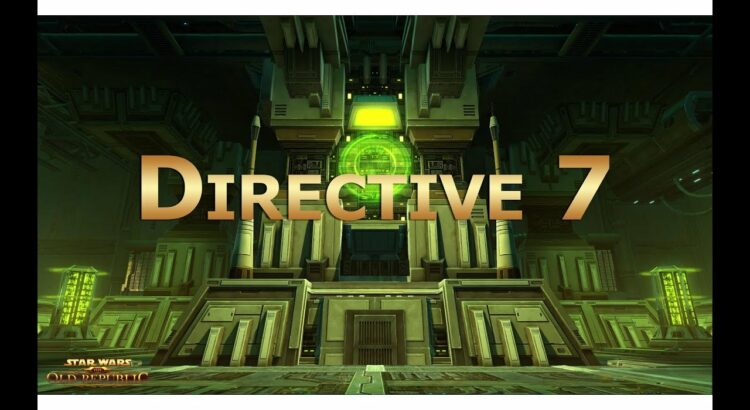 Directive 7 is an endgame flashpoint in the popular massively multiplayer online role-playing game (MMORPG) Star Wars: The Old Republic (SWTOR). It is available to both the Empire and the Republic, and players can access it by speaking to a level 45 droid on either Carrick Station (Republic) or Vaiken Spacedock (Imperial).

In SWTOR, flashpoints are instanced areas that can be played with a group of players and typically involve a series of challenging battles and boss encounters. Directive 7 is no exception, and players will need to bring their best skills and tactics to emerge victorious.

The story of Directive 7 takes place during the ongoing Cold War between the Empire and the Republic. The flashpoint follows the player character as they are sent to investigate a mysterious signal that has been emanating from a remote planet. Upon arrival, they discover that the signal is coming from an abandoned Republic research facility that has been taken over by a group of rogue droids.

The player character, along with a group of other heroes, must fight their way through waves of hostile droids and eventually confront the source of the signal, a powerful droid known as Directive 7. Along the way, players will encounter a variety of challenging bosses, including a pair of deadly droid twins and a giant droid known as the X-1 Viper.

One of the standout features of Directive 7 is its impressive visuals and production values. The abandoned research facility is a highly detailed and atmospheric setting, and the various droid enemies are all well-designed and visually distinct. The flashpoint also features some impressive cutscenes and voice acting, which help to immerse players in the story and bring the world of SWTOR to life.

In terms of gameplay, Directive 7 is a challenging and engaging experience that will test the skills of even the most seasoned SWTOR players. The various boss encounters are all unique and require different tactics to defeat, and the flashpoint as a whole is well-balanced and fairly paced. The flashpoint is also well-suited for a variety of playstyles, as it offers a mix of ranged and melee combat, as well as various environmental hazards to navigate.

In conclusion, Directive 7 is a standout endgame flashpoint in SWTOR that offers a challenging and engaging experience for players. With its impressive production values and well-designed boss encounters, it is a must-play for fans of the game.