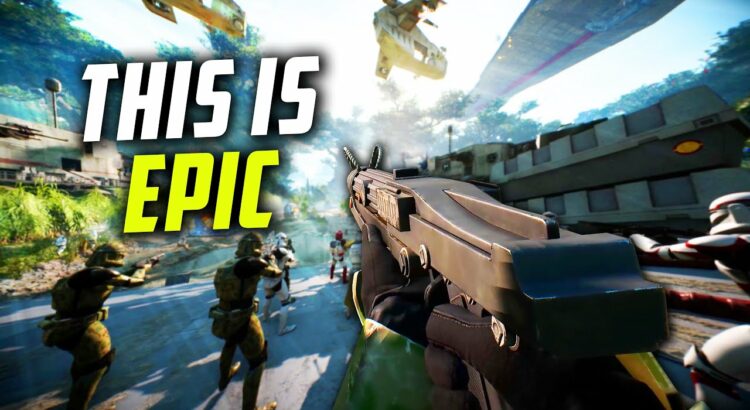 Star Wars Battlefront 2, the reboot of the 2005 game of the same name, was released in 2017 to mixed reactions. Many players were disappointed with the heavy monetization of the game, which included loot boxes and pay-to-win mechanics that gave players who were willing to spend extra money an unfair advantage over those who were not. These mechanics were so controversial that Disney, the owner of the Star Wars franchise, stepped in and told the developer, EA DICE, that the monetization was unbecoming of a Star Wars game.

Despite the initial negative reception, EA DICE eventually stripped out all of the loot boxes and pay-to-win mechanics from the game, and many players now consider it to be “good.” I decided to try it for myself and see what the game had to offer modern audiences.

First and foremost, the graphics in Battlefront 2 are absolutely stunning. The attention to detail in the character models, environments, and special effects is unparalleled, and it truly feels like you are a part of the Star Wars universe. The sound design is also top-notch, with the iconic music and sound effects from the movies adding to the immersion.

The gameplay in Battlefront 2 is fast-paced and action-packed, with a variety of modes to choose from. The main mode is Galactic Assault, which pits two teams of 20 players against each other in epic, objective-based battles on various planets from the Star Wars universe. There are also smaller, more intimate modes like Strike and Heroes vs. Villains, which focus on smaller, more intense firefights.

One of the biggest criticisms of the original Battlefront games was the lack of a singleplayer campaign, and Battlefront 2 remedies this by offering a fully-fledged campaign mode that tells the story of Iden Versio, an Imperial special forces officer. The campaign is well-written and offers a unique perspective on the Star Wars universe, and the voice acting and motion capture work is excellent.

One of the standout features of Battlefront 2 is the inclusion of “hero” characters, iconic characters from the Star Wars movies that can be summoned on the battlefield and controlled by players. These characters have unique abilities and playstyles, and using them effectively can turn the tide of battle. The hero roster includes fan favorites like Luke Skywalker, Darth Vader, and Princess Leia, as well as newer characters like Rey and Finn from the most recent trilogy.

Overall, I was pleasantly surprised by the quality of Battlefront 2. While the initial controversy surrounding its monetization was rightfully deserved, the game has come a long way since its release and is now a solid entry in the Star Wars franchise. The graphics, sound design, and gameplay are all top-notch, and the inclusion of a singleplayer campaign and hero characters adds a lot of depth and replayability to the game. If you are a fan of Star Wars and first-person shooters, I would definitely recommend giving Battlefront 2 a try.