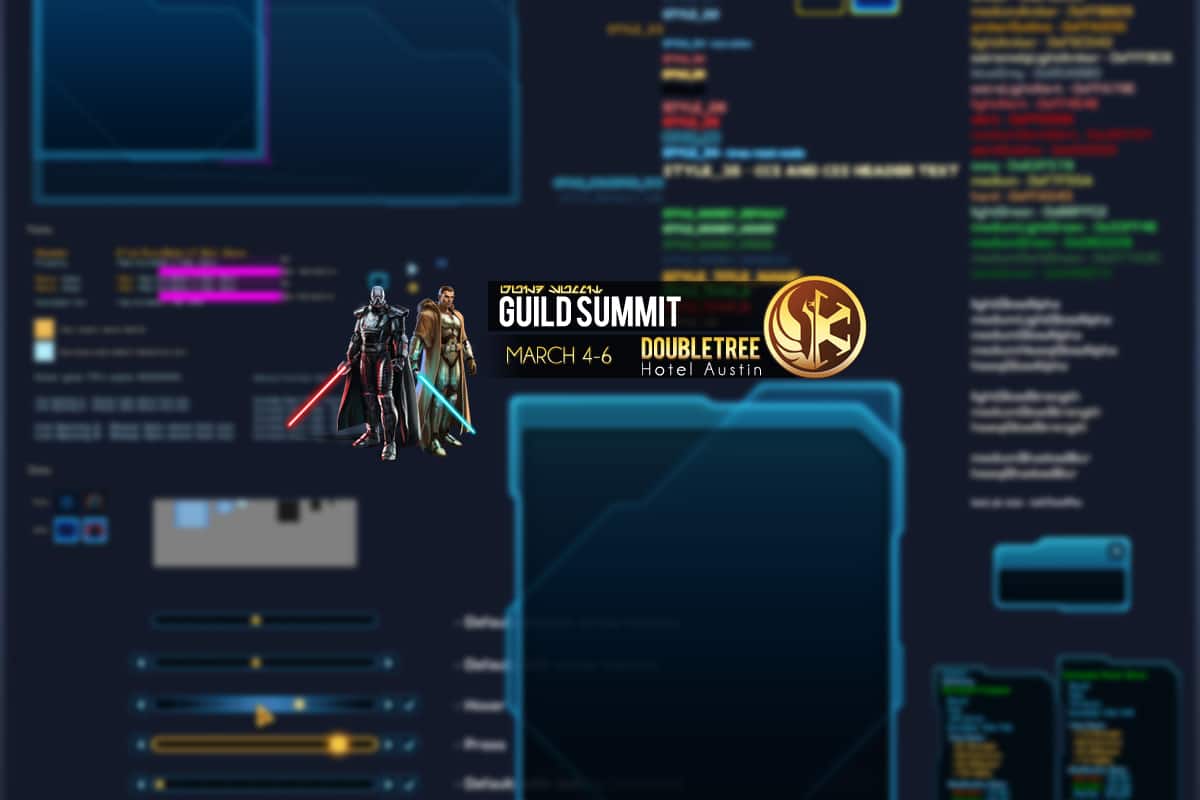 Another interesting part of the Summit was panels on Roleplaying, Guilds and the UI changes. We concluded with the “all the rest” section that was whatever hadn’t already been covered in another panel. More than 18,000 people were watching along by the end of the livestream and some livestream questions were also asked in the Q&A session.

RP discussion Legacy features:
While the Legacy system will be intertwined in every other aspect of SWTOR, as mentioned before, it will also have a big impact on Roleplaying within the game. Whether you play on an RP server or just like to RP on your server or occasionally for fun, there are aspects of the Legacy system that will help with this.
Roleplaying Q&A

A: On the list.
Q: Clothing restricted by class
A: In the future all cosmetic gear will work for all types and we will get a ton of it.
Q: Custom-emotes cross-faction
A: In the Works.
Q: Type 4 Sith, we want an equivalent male slave outfit.
A: It’s coming.
Q: Re-enter class quest areas to RP
A: No, but we will give you some RP space in the future.
Q: People with un-RP legacy names – dude, bro legacy, any chance for tighter RP naming policies?
A: More ways to adjust what you see in other people’s nameplates. Can’t really restrict naming rules.
Q: More variety of ambient content in populated areas.
A: In the Works.
Q: Squad inside a guild system – like a guild inside a guild for people that don’t want to leave their old guild?
A: Why can’t you do it with private chat channels?
Q: Cut/paste chat lines to allow RP off the game.
A: No answer at this time.
Q: Legacy system- not blood related?
A: Yes people in your legacy can be allies etc, does not have to be in a family.
Q: Attach other players to your legacy?
A: It is coming but it is tricky- something in the future.
Q: Companion ride along with taxis – ride shotgun –
A: we had something implanted before, but M1-4x came along.
Q: Name a companion for RP purposes.
A: No Answer at this time
Suggestion: Ignore turn off their nameplates too.
A: We love it – good solution to people with weird Legacy names.

Q: I don’t like a companion, can I kick him/her out?

A: No, we originally allow you to kill companions – people abused it and kill off all their companions and got mad.
Suggestion: Biography sheet in character window to help with role-playing.
A: you carry a huge amount of data – companions, quests etc we are trying to reduce it but you can comment on your friend list with 1.2

Suggestion:Will we see a possibility of a 2-seater mount?

A: we would love to but it is way down the road. You will ride a tauntaun mount first.
Guilds
The guild section was of course, one that all the present guild leaders and representatives were anxious to learn more about. One impression that I definitely got from the Summit was that staff does care about us and the future direction of the game. They want to make a great game and they want to give us as much of as many things that we want as they can. The cliché says “you can’t please all of the people all of the time” and that is true but in SWTOR, BioWare is coming as close as they can.
Here’s a recap of some of what was said on guilds:
Post 1.2 stuff that will come “soon”
Guild Q&A Section
Q: Guild mail/newsletter system – work in conjunction with guild calendar system?
A: We are hoping guild calendar will solve that but it involves a lot of storage space and can involve spam potentially
Q: What kind of guild UI improvements do you have?
A: Fix mouse scroll in guild UI and allow you to invite people to groups from guild UI.
Q: Look at guild list and check people’s crafting skills
A: Happening sometime after patch 1.2
Q: Plan for a tax system?
A: That is in category of well – duh moments. ya I just realized we didn’t have it – we will get it in now that we have a guild bank. no ETA.
Q: Off-game approval of guild members like we had it pre-launch?
A: Maybe, but it’s a lot of work – too much stuff to do.
Q: Allowances by rank – does repair take away from guild allowances?
A: Yes, and you can also re-spec from guild funds
Q: Any plan for logs to see g-invites and g-kicks?
A: Yes, no ETA
Q: Invite people from guild list?
A: It’s done in 1.2
Q: Able to see if someone is grouped in guild chat and change colors if the group is already full?
A: Interesting idea, I will write it down.
UI discussion