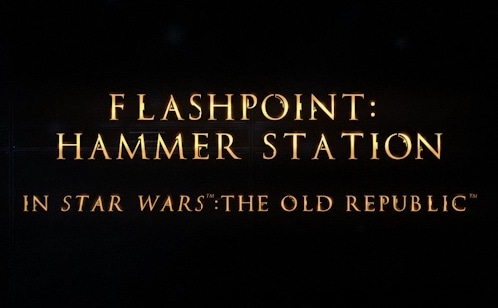 The second Flashpoint to open up in Star Wars: The Old Republic is Hammer Station. You only have to be a level 15 to go through this Flashpoint and for the most part, it’s rather easy. You’ll encounter 3 bosses with the last one being the most challenging. The main thing that you need to know before getting started is that you will face lots of droids. For this reason, you must have someone on your team that can CC droids are you’ll run into a lot of problems.

When you first begin your mission, you have the option of going into the room at the end of the first long hallway you come to, if a member of your team has Bioanalysis. Otherwise, it would be pointless to go here because you’ll need to use Bioanalysis on the barrels to acquire the Detoxifying Fiber.

If you do acquire this item, eight of them will go into your inventory and your team can use them to breath when in the toxic tunnels of Hammer Station. Speaking of which, there is one right next to the barrels. After fighting the mobs inside, you can open up a chest that should contain a blue and a green item.

The next thing you’ll need to do is head south to reach the mission objective. You won’t encounter a lot of pulls along your way but take your time and CC often. In-between your battles with the bosses, you will need to fight a bunch of droids, so it’s important to have someone who can use Crowd Control on your team.

When you reach your first objective, you’ll come face-to-face with DN-314 Tunneler, who is basically a combination of a droid and a tank. He has around 30K HP and it’s mostly a tank-n-spank fight. He has two abilities to be aware of. One is the Laser Beam and it will focus damage on a random player throughout the battle. Healers will need to respond fast and start healing any affected player right away.

The other ability is Demolition Droids. A few minutes after the fight begins the boss will summons a bunch of droids. They will run around the area and eventually self-destruct. Since you can’t kill them, the best thing to do is avoid them especially when you see them pulsating. This means they are going to explode any second and they will do a lot of damage if you’re close by.

After killing the boss, keep going south until you reach the Security Wing. For the most part, you need to keep going straight until you reach a big room with stairs. Here, you’ll need to go up the stairs and around until you get on the catwalk to reach your next objective.

As soon as you reach the next objective, everything will update and you’ll be facing the second boss, Vorgan the Volcano and friends. Vogan is not very difficult so expect the basic tank-n-spank fight. His friends are two 8K HP elites so they’re easy to beat, as well. Take them out first and then concentrate your efforts on the boss. Once he’s dead, pick up the loot and use the Security Console located behind him.

In all of the flashpoints, you’ll run across a console (or in some cases an item) that gives you an option. In this case, you have to decide whether or not to blow up an engineering level in order to receive your reward. However, the decision is not quite as simple as it sounds.

Blowing up the engineering level is a Darkside decision and choosing not to blow it up is a Lightside decision. Only you and your team can make this decision but you should consider your choice carefully. All decisions have consequences to go along with the reward. After making your decision, head over to Section Zero.

On your way to Section Zero and the third boss, you have to cross over The Bridge. Of course, this is not any ordinary bridge. Instead, it’s a Blue Hologram Bridge and when you get close to it, it will reveal itself by turning blue. When the bridge is blue, you can cross it.

The problem is, approximately every 20 seconds the bridge will turn red and then vanish. In its place, a huge boulder will fly through the gap. Timing is everything so pay close attention and don’t waste any time getting across that bridge or you won’t make it. After crossing the bridge, you’ll soon reach the final objective.

When you reach the final objective, everything will update again and you’ll be facing Battlelord Kreshan. He is the hardest boss in this flashpoint so don’t let your guard down. He has 3 abilities to be aware of and he does summon adds to help. They have around 700K HP and they should be taken down as soon as possible because they can gang up on and take out your healer.

The Frontal Blaster Spray will damage everyone that is standing in front of the boss. The best way to avoid this attack is to have the tank turn him away from your group. The second attack is the Bomb. When he uses this attack, a big red circle will appear on the ground right before it explodes. Stay out of the circle and you don’t have to worry about this one.

The third attack is the Knockback and Kreshan will use it occasionally throughout the battle. Any player that is standing near the edge when he uses this attack will most likely get knocked off the platform. For that reason, pay attention to your position.

Once you take down Battlelord Kreshan, go to the Station Computer located behind him to complete this Flashpoint.