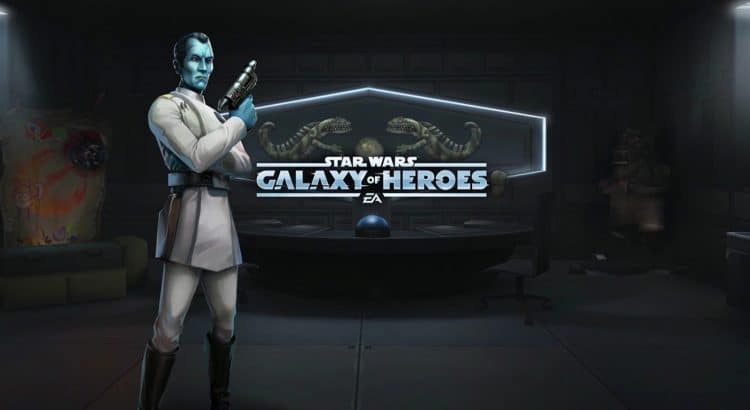 Here are the latest patch notes for Star Wars: Galaxy of Heroes.

It’s zero hour, and the galaxy sees its biggest threat yet! Will you be the architect of your own destruction?

Grand Admiral Thrawn
• 5 Star Dark Side character with the Empire and Support roles
o The first Empire character who can dispel debuffs on allies and can create a new debuff, Fracture!
Basic: Manipulate
• Base: Characters: Deal Special damage to target enemy and grant them Speed Up for 1 turn. When this Speed Up expires, inflict Ability Block for 1 turn, which can’t be Resisted.
Special 1: Fracture
• Base: Deal Special damage to target enemy 4 times, dispel all buffs on them, remove 50% Turn Meter, and inflict Fracture until the start of Thrawn’s next turn, or until Thrawn is defeated. This Fracture can’t be Copied or Dispelled. This attack can’t be Evaded or Resisted.
Special 2: Grand Admiral’s Command
• Base: Swap Turn Meter with target other ally. Dispel all debuffs on Thrawn and that ally, and they recover 5-40% Protection.
Leader: Legendary Strategist
• Base: Empire allies have +5-15% Max Protection, +15-25% Offense, and gain 10-20% Turn Meter whenever they Resist a detrimental effect or suffer a debuff. Empire allies gain a new Special ability, Maneuver: Dispel all debuffs on this character and gain 50% Turn Meter.
Unique: Ebb and Flow
• Base: Thrawn has +50-100% Counter Chance, +50-100% Tenacity, and -50% Speed while any enemies are Fractured. Whenever another Empire ally uses a Special ability while Thrawn is active, that ally gains 3-15% Turn Meter and, if any enemies are Fractured, Thrawn loses 3-15% Turn Meter.

The Artist of War

Bug Fixes
• Boba Fett: “Bounty Hunter’s Resolve” now correctly indicates that it can’t be prevented.
• Emperor Palpatine: “Crackling Doom” will no longer score Critical Hits while “Lord of Hunger” (leader ability of Darth Nihilus) is in effect.
• Ezra Bridger: “Watch and Learn” will now correctly grant Ezra 100% Critical Chance.
• Hera Syndulla: “Backup Plan” now correctly indicates that it can’t be prevented.
• The Phoenix Flash events Bonus Tier requirements bug has been updated! There was a bug discovered where players would have five, 5* Phoenix members including Chopper and were unable to play the event. The requirements for the tier have been updated to accommodate for this bug. Requirements now: Hera Syndulla, Garazeb “Zeb” Orrelios, Kanan Jarrus, Sabine Wren, and Ezra Bridger (5-star or higher).