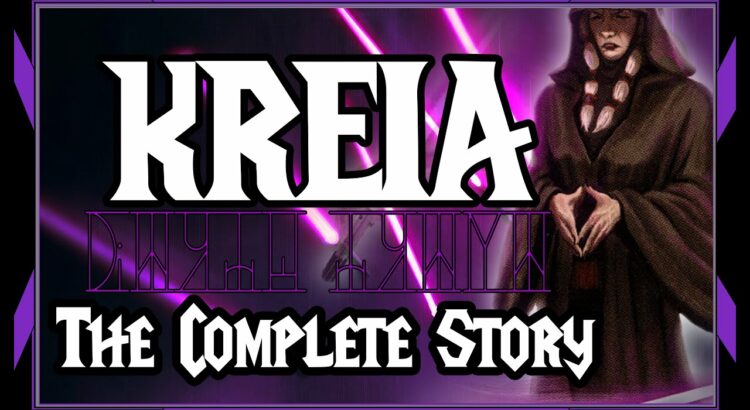 Kreia was once a powerful Jedi Master, known for her deep understanding of the Force and her ability to see beyond the superficial nature of the world around her. She was a historian and a mystic, spending long hours in meditation as she sought to unravel the mysteries of the universe.

As she grew older, Kreia’s eyesight began to fail, and she became increasingly reliant on the Force to guide her through the world. Despite this limitation, she remained a powerful and respected figure within the Jedi Order, and her insights were highly sought after by her fellow Jedi.

However, Kreia’s worldview began to shift as she delved deeper into the nature of the Force. She began to view it not as a benevolent guiding force, but as a corrupting influence that enslaved all who used it. This controversial belief put her at odds with many of her fellow Jedi, who saw the Force as a source of great good.

Eventually, Kreia’s views became so extreme that she was exiled from the Jedi Order, and she took on the name Darth Traya, becoming a Sith Lord. She believed that the Jedi and Sith were both misguided in their understanding of the Force, and that the only way to truly understand its true nature was to reject the Light and Dark sides altogether.

Despite her fall from grace, Kreia remained a deeply intelligent and philosophical figure, and her teachings continued to attract followers from both the Jedi and Sith orders. She saw the struggles between the two sides as a petty squabble, and believed that both were blinded by their own beliefs, unable to see the true potential of the Force.

To Kreia, the Force was a complex and multifaceted entity, and it was impossible to fully understand it through the narrow lens of Light or Dark. She believed that true enlightenment could only be achieved by embracing the full spectrum of the Force, and by rejecting the rigid classifications of Jedi and Sith.

Kreia’s teachings were highly controversial, and many saw her as a dangerous heretic who threatened the very foundations of the Jedi Order. Nevertheless, she remained a powerful and influential figure, and her insights continued to shape the understanding of the Force for generations to come.

Kreia was once a revered Jedi master, known for her exceptional abilities in the Force and her keen mind for history and mysticism. Despite her blindness, she relied on marathon meditations to gain insight and understanding of the universe and the Force. However, her views on the Force and the Jedi Order were controversial, as she believed that the Force was a tool of enslavement, and that the Jedi and Sith were too blinded by their own beliefs to see the true nature of the universe.

Kreia’s journey began long before the events of Star Wars: Knights of the Old Republic II – The Sith Lords. She was a student of the Jedi Order during a time of great turmoil, as the Galactic Republic was on the brink of collapse and the Jedi were struggling to maintain peace and order. Kreia was a gifted student, and she quickly rose through the ranks to become a Jedi master.

Despite her successes, Kreia was always one to question the established norms and traditions of the Jedi Order. She saw the rigid adherence to the light side of the Force as a form of enslavement, and she believed that the Jedi were too blinded by their own beliefs to see the true nature of the universe. She often clashed with her fellow Jedi over these beliefs, and her views were seen as heretical by many.

As the Galactic Republic collapsed and the Clone Wars raged on, Kreia found herself at odds with the Jedi Council. She believed that the Jedi were being used as pawns in the conflict, and she saw the actions of both the Republic and the Separatists as equally misguided. In the end, she left the Jedi Order, disillusioned and disheartened by the direction it had taken.

Kreia’s departure from the Jedi Order marked the beginning of a new phase in her life. She traveled the galaxy, searching for a deeper understanding of the Force and the true nature of the universe. She encountered many beings from all walks of life, and she learned from their experiences and perspectives.

As she journeyed, Kreia began to develop a new philosophy of the Force. She saw it as a tool that could be used for both good and evil, and she believed that the Jedi and Sith were too focused on the light side and the dark side, respectively, to see the true potential of the Force. She came to believe that the only way to achieve true understanding and enlightenment was to reject the light and the dark, and to embrace the balance that lies between them.

Kreia’s views on the Force were highly controversial, and she was often met with resistance and disbelief. However, she remained steadfast in her beliefs, and she dedicated herself to spreading her teachings to others. She became known as a mystic and a historian, and she gained a reputation as a wise and insightful guide for those seeking a deeper understanding of the Force.

In the end, Kreia’s journey brought her to the world of Malachor V, where she encountered a group of Jedi who had been exiled from the Order. She saw in these Jedi a willingness to question and challenge the established norms, and she saw an opportunity to impart her teachings on them. She took them under her guidance, and she became known as their mentor and leader.

As Kreia led her students on their journey, she encountered a young Jedi named Meetra Surik. Kreia saw in Surik the potential to become a powerful force user, and she took her on as her apprentice. Under Kreia’s guidance, Surik became a skilled Jedi, and she helped to defeat the Sith Lord Darth Nihilus and bring an end to the conflict on Malachor V.

In the end, Kreia’s journey came full circle, as she returned

to the Jedi Order and became a respected member once again. Her views on the Force and the Jedi were still controversial, but her teachings and insights were valued by many. She dedicated herself to helping the Jedi navigate the challenges of the post-war era, and she worked tirelessly to bring balance and understanding to the galaxy.

Despite her success in reconciling with the Jedi, Kreia’s journey was far from over. She continued to travel the galaxy, seeking new knowledge and understanding, and she became known as a wise and powerful force user. She encountered many challenges along the way, but she always remained true to her beliefs and her commitment to balance.

As Kreia’s story came to a close, she left behind a legacy of wisdom, insight, and understanding. Her teachings and philosophies continue to inspire and guide those who seek a deeper understanding of the Force and the universe, and she will always be remembered as one of the greatest and most controversial figures in the Star Wars universe.