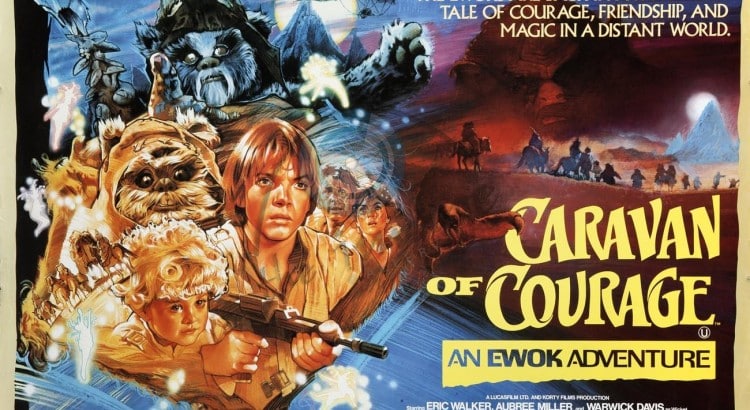 Not everyone was a fan of the teddy bear-like additions to the Star Wars universe George Lucas introduced us to in Return of the Jedi (1983), but if you were (as I was), then you were in luck! Not only did Ewok fans get an animated series based on the cuddly creatures, but two TV movies as well! Naturally, the most popular Ewok of all, young Wicket W. Warrick, was the star furball in both TV outings which told the story of the Towani family, four humans who had become stranded on the forest moon of Endor.

The first of these all-knew, live-action Ewok adventures (said to have taken place shortly before Return of the Jedi) was 1984’s “Caravan of Courage,” though it was better known in the U.S. as simply “The Ewok Adventure”. In this first 96 minute film, a holiday charm is added to the originally late-November affair by the addition of Burl Ives as narrator. Perhaps this, along with having a story focused on a human family, was to avoid the troubles of the 1978 Star Wars Holiday Special in which the Wookie language composed far too much of the dialogue. Anyway, in “Caravan of Courage,” the two Towani children, a four-year-old girl named Cindel and her stubborn teenage brother Mace, find themselves in need of assistance when their parents disappear from the crash site of their family’s starcruiser. Though Mace is reluctant to accept help the whole time, the selfless Ewoks form a questing party to retrieve the adults from the lair of the dreaded Gorax, a giant that is set on devouring the caged Towani parents. “Caravan of Courage” is a delightful film for the whole family, if you love Ewoks that is. It’s a sweet, magical, and adventurous tale about family bonds, courage, faith, love, and unselfishness. Excellent for something different to watch around the holidays, and great for the Star Wars fan as new characters are introduced and we get to see (in both films) the last of old-school Star Wars visual effects.

A year after “Caravan of Courage” came the much darker “The Battle for Endor”. In this narrator-free, more violent Ewok tale, Cindel soon finds herself to be the last Towani after a group of marauders attack the Ewok village searching for a mystical power source for their king. She and best friend Wicket escape from the hideous alien attackers and take up refuge with a crotchety old hermit named Noa (Wilford Brimley) and his fast-moving, furry friend, Teek. But, when the evil King Terak can’t make use of the starcruiser power cell he stole from Cindel’s family, he sends his witch Charal to capture the child.

Both Ewok films are excellent family features for children and Star Wars fans who are partial to Wicket and the other Ewoks. Just be aware that the second has more violence/death than the first, which has very little and makes it more meaningful. Fans of the Ewok battle antics in “Return of the Jedi” may be quite pleased to see similar action in “Battle for Endor.” It’s great to see these films released on Youtube. They are presented in fullscreen, and as far as I know, that is how they have always been.