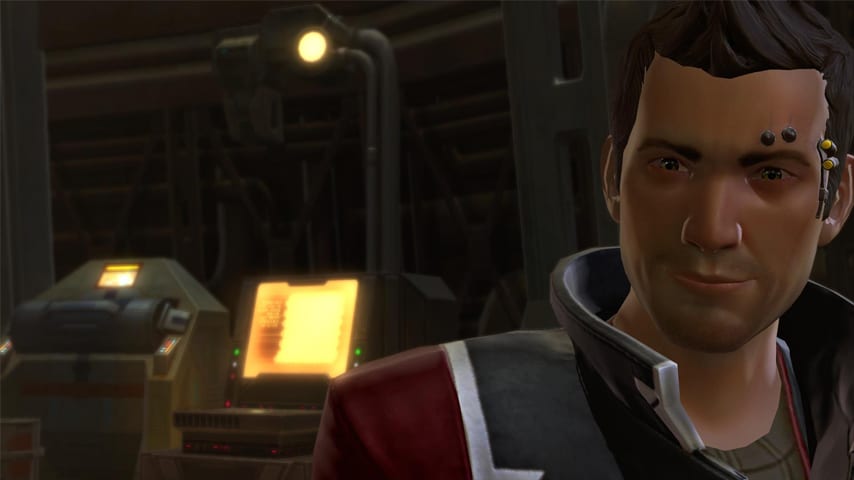 BioWare posted a new roplaying developer post at the official website. In case you are wondering who Jonas Balkar is,  he is from the Trooper’s class story. This is the SIS agent that Havok Squad teams up with a lot. Below is a thoroughly entertaining read. I love the idea of Balkar being this annoyance that Theron can’t get rid of. Check it out:

Theron Shan sat shackled to a jukebox in one of the backrooms of the Dealer’s Den. The air was stuffy, smelling of body odor and spilled drinks. His lip was swollen from the first punch of the evening and he counted at least two broken ribs.

In retrospect, all of this was inevitable. He could blame the Twi’lek who had falsely accused him of cheating at sabacc, or even his Houk captor, but they were merely side effects, a consequence of a larger mistake. No, there was only one person to blame for this. The one who had put him up to a “night on the town.”

From their brief and rather unpleasant time together, he had learned the Houk, named Bolgm, did not understand the concept of personal space.

“They’re not for sale,” Theron spat. “They’ll stay exactly where they are… in my face.”

The wrinkled but firm flesh of Bolgm’s back hand collided with Theron’s jaw. “Not really in a position to make demands are you, boy?”

Theron smirked. Let the big lug think he was helpless. Sure, he was unarmed and intoxicated, but he’d escaped from worse situations… recently, in fact.

Still, it was embarrassing how easily he’d been played.

“We’ll have a drink. Play some cards. Maybe even share a laugh or two. What’s the worst that could happen?” That’s what Jonas had said.

Things were moving fast since Revan’s defeat on Yavin 4. New fancy titles had been issued and directives given – the telltale bureaucratic signs of something big on the horizon. If the Republic was going to stand a chance against the Emperor, Theron needed his task force ready as soon as possible. Which was why he refused R&R upon his return to Coruscant.

His SIS colleagues at the Heorem Complex understood that, respected it even. All except Jonas Balkar. Theron had been minding his own business, studying dossiers for potential undercover agents, when Jonas had interrupted him.

“Lighten up, Shan. Drinks are always in order after saving the galaxy. This isn’t Imperial Intelligence. Or did you forget after all that time on the beach with a pretty blonde?”

“Unlike you, I don’t feel the need to fraternize with my contacts, Jonas.”

“We all have our skills. You brood. I charm. Whatever works, right?” The man was insufferable and smoother than a sleen’s hide.

“Thing is, Jonas, your charm doesn’t work on me.” Theron waved him away, returning to his work.

Jonas leaned against his desk. “I’m not above playing the blackmail card.”

Theron laughed. “What could you possibly have on me?”

“Oh I don’t know…” Jonas studied his nails. “I heard the strangest story from the Outer Rim about an initiate and a horned goat-”

Theron dropped the dossier and scowled. “One drink.”

That one drink turned into too many and before he knew it, Bolgm was hauling him from the sabacc table. Jonas had been too busy snoring into his whiskey to notice.

“You brought this on yourself.” It was the Twi’lek. She had stayed quiet since her initial accusations, preferring to sit on a cargo box, shuffling cards while Bolgm and Theron became better acquainted. “Shouldn’t have tried to cheat us.”

There was no point in defending himself. The so-called cheating was just a ruse to get him here. The real question was if the Twi’lek was a player or a pawn in this game.

“And who exactly is ‘us’? Caught on that my friend here is Bolgm, but you’re still a mystery.”

She pushed the coral lekku from her shoulder and flicked a card at his feet. “Lylos. I’d ask your name, but I don’t care.”

“Am I going somewhere?”

“You ask a lot of questions,” Lylos said, flinging another card at him.

There was a knock at the door. Bolgm smacked Theron over the head before getting up to let in an Anomid. “Doctor Zeke! Merch is right over here.”

Zeke’s milky eyes settled on Theron. “You were instructed not to rough him up.”

“Bruises heal. The implants are fine.” Bolgm pulled Theron to his feet.

The doctor’s six fingered hand grasped Theron by the chin, inspecting his cybernetics. Two seconds and Theron could dislocate his thumbs to free himself of the restraints. All he needed was the right moment. The robotic voice produced by Zeke’s vocalizer vibrated in his ear drums. “Luckily for you, everything appears to be in order.” He released Theron with a nod, making his way back towards Bolgm and Lylos.

Bolgm clapped his hands together. “Let’s talk payment then.”

Behind them, the door slid open to reveal a yawning dark haired man.

“What’s the rush?” Jonas Balkar asked, training his blaster on the doctor.

On cue, Lylos threw the deck of cards in Bolgm’s face, giving Theron the chance he was waiting for. The crack of his joints dislocating sent a spike up Theron’s arms. Almost immediately, his implants emitted a serum, dulling the pain. Free from his restraints, Theron charged at Bolgm. The force of his body alone wouldn’t have been enough to drop a Houk, but the thug’s boot heel slid against the smooth surface of one of Lylos’s cards. The enormous, pudgy body hit the ground with a thud.

The Anomid reached for his blaster and took a shot at Jonas. He ducked, giving his target an opening to push past him. “Why do they always run?”

“If you lose him, this night’s a bust!” Lylos screamed, bringing the butt of her blaster down on Bolgm’s temple and taking him out of the game.

Theron chased towards the fleeing doctor with Jonas. “Nice of you to show up.”

“I was buying another round!” Jonas yelled, tossing Theron his spare blaster.

Theron resisted the urge to punch him. “You passed out. The Idiot card is still imprinted on your cheek!”

Doctor Zeke skidded around the corner to burst into the main hall of Dealer’s Den. It was prime time and the bar was packed, the kloo horn solo from the band barely audible over the crowd’s chatter, but there was still space to run. Zeke clipped the shoulders of patrons – Theron and Jonas followed the disgruntled gasps until finally he was in reach. Theron launched himself at the doctor, crashing both of them into a nearby sabacc table.

Jonas strolled over. “I’d fold if I were you,” he told Zeke before Theron slammed the doctor’s head against the tabletop.

Lylos appeared behind them. “Got him?”

“Was there any doubt?” Jonas asked. “Theron, this lovely creature is Lylos Tannon. Coruscant Security Force.”

“Pleasure,” Theron said to Lylos dryly, before turning back to Jonas. “You could have filled me in. Between you and Lana, who needs enemies?”

“Hey now, the request has been sitting on your desk for weeks. You just never took the time to read it. Besides, this wasn’t so much of a mission as a favor.” Jonas winked at the Twi’lek, who smiled in return.

“One that’s greatly appreciated.” She slapped cuffs on the unconscious Zeke. “Been in this dump for weeks trying to wrangle these guys. Doctor Zeke’s made a name for himself on the black market selling premium cybernetics. Couldn’t risk calling it in unless I caught the jerks red-handed.”

Jonas sat down at the sabacc table and flipped through the discarded cards. “Your new best friend – Bolgm was it? He hires people to keep an eye out for anyone with high-grade implants.”

Theron filled in the blanks. “They accuse the poor slob of cheating, Bolgm takes them to the back and calls the doctor.”

“I needed to make sure a poor slob showed up tonight,” Lylos explained, joining Jonas at the table.

“And I thought you’d be perfect, Shan.” Jonas grinned, his pearly white teeth glowed from the neon signs of the cantina.

“Yeah, well, next time leave me out of it.” Theron could feel a headache coming on. “You owe me for this, Balkar.”

“Already covered – I paid your tab.”

Theron slumped into the chair next to him. “How gracious of you.”

“I thought so,” Jonas remarked, snaking an arm around Lylos’s shoulders.

The waitress returned with their drinks. Jonas raised his glass. “To Lylos’s well-deserved promotion.”

She swirled the brown liquid in the glass. “That’s not for sure yet.”

“Then to saving the galaxy.”

“Neither is that,” Theron said, his tone grimmer than intended.

“Tough crowd.” The adrenaline from the chase was fading. For a moment, the three sat at the table, lost to their own thoughts. Theron’s to do list built in his mind like the condensation on the whiskey glass in his hand. Jonas broke the silence. “Guess we’ll just have to settle with a night on the town.”

Theron sighed. “I’ll settle with getting back to work.”

“Not a chance.” Jonas clinked his glass against Theron’s and took a healthy gulp. “You’re too big picture, Shan. Head always in the stars. There’s no point in saving the skies if you forget the little people on the ground.”

“Never pegged you as sentimental.” Theron chuckled, giving in to one last drink.

Jonas frowned. “Let me offer you a bit of advice. Before you run off on your next classified whatever, take the time to get to know the people around you. Could save your life.”

“I…” Theron paused. This night had been full of surprises. “You’re not entirely full of it.”

“Keep that between us.”