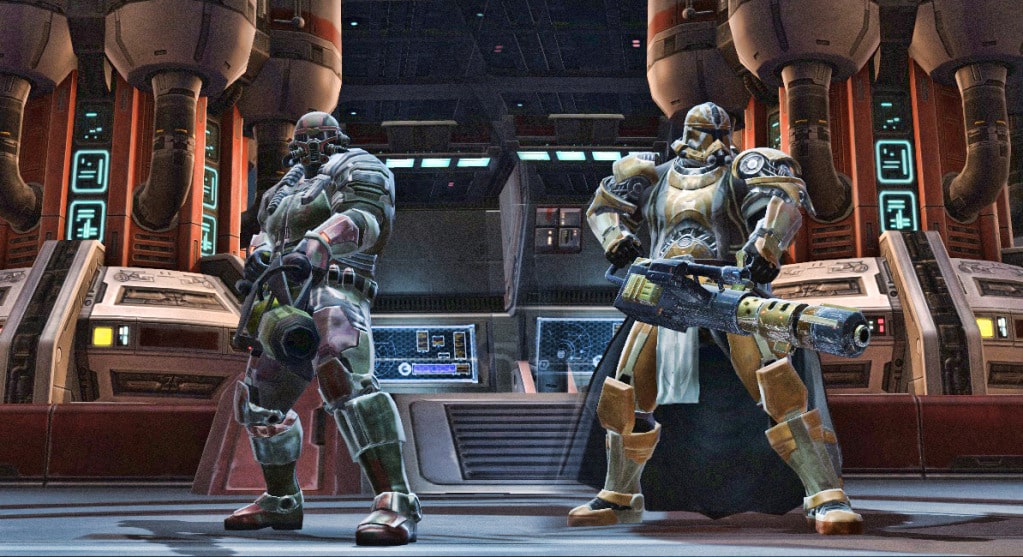 BioWare posted a Developer Blog yesterday named A Dangerous Betrayal. What you are about to read is an excerpt from the official Star Wars™: The Old Republic™ Encyclopedia. It will describe an overview of all 3 Acts of the Republic Trooper Class story. Although we try to avoid them wherever possible, this excerpt will contain spoilers. Please read at your own risk…

Prologue
Tensions between the Republic and the Sith Empire are nearing the breaking point. Havoc Squad faces its toughest challenge yet: to ensure the Republic triumphs over its ancient enemy once and for all. Their latest battlefront is the war-torn world of Ord Mantell, where guerilla forces wage a destructive battle to divide the planet from the Republic. These violent separatists have stolen a ZR-57 orbital strike bomb from the Republic, which is capable of incinerating hundreds of square kilometers in the blink of an eye. Havoc Squad is ordered to locate and retrieve this devastating weapon. However, their newest member, a determined sergeant, uncovers an entirely different threat to the people of the Republic – a mass defection in the Special Forces ranks!

Chapter One: A Dangerous Betrayal
The defections start with Havoc Squad itself. The team’s heroic leader, Commander Harron Tavus, becomes convinced that the Republic has betrayed its best warriors. Seeking revenge, Tavus leads his closest allies in Havoc Squad, along with many other allies, in secretly joining the Sith Empire. The traitors put their plan into motion on Ord Mantell, where they intend to hand the deadly ZR-57 bomb over to the Empire as proof of their sincerity. But the plan is revealed by the one member of Havoc Squad who remains loyal: the skilled new sergeant who had tracked down the bomb in the first place.
Although Tavus and the rest of the traitors manage to escape, the unyielding sergeant is promoted to command Havoc Squad. Now a lieutenant, this elite warrior sets out to rebuild the Republic’s best fighting team and to hunt down Tavus and his followers. One after another, the traitors are brought to justice, until the dogged lieutenant finally locates Tavus himself. The former war hero fights with tremendous skill, but in the end, he is no match for the battle-hardened new commander of Havoc Squad. Tavus falls, and the lieutenant must make a choice: should the traitor die for his crimes, or be returned to Republic custody alive in exchange for information on the Empire’s plans for war.

Chapter Two: The Return of Havoc
Just as the SpecForce defections are dealt with, the Republic’s Strategic Information Service uncovers a new Imperial threat: a prototype superweapon, codenamed Gauntlet, which is capable of targeting and destroying ships as they travel through hyperspace. In the hands of the Sith Empire, such devastating power could utterly crush the Republic’s military. Havoc Squad is called upon to destroy the Gauntlet before it can enter service. Now a captain, the team’s seasoned commander scours the galaxy to find the manpower needed to carry out the offensive. A renegade explosives expert, an exotic technical specialist, and an entire platoon of bunker-busting infantrymen all join the mission just in time for the assault on the Gauntlet to begin.
Backed by a full Republic assault fleet, Havoc Squad boards the Gauntlet and sabotages the massive superweapon from the inside. Despite overwhelming odds, the mission is a success, and the Gauntlet is completely destroyed. However, the mastermind responsible for the weapon’s development, the brilliant Imperial General Rakton, manages to escape and vows revenge.

Chapter Three: Final Showdown
Enraged by the destruction of his Gauntlet superweapon, General Rakton launches a merciless campaign into the Core Worlds. Newly promoted to the rank of major, Havoc Squad’s celebrated commander brings the Republic’s top forces to bear against Rakton’s conquering legions. Battles between the two armies tear across the galaxy, until Havoc Squad and Rakton’s personal forces enter a final showdown on the planet Corellia.
The veteran major locates Rakton’s fortress headquarters and besieges it with an elite group of Republic allies, eventually facing down the infamous Imperial general himself. Rakton is a master of personal combat with decades of bloody experience, but in the end, he’s still no match for the Republic’s most elite soldier. The major emerges victorious, bringing an end to the Empire’s campaign into the Core Worlds, and finally turning the tide of the war in the Republic’s favor.