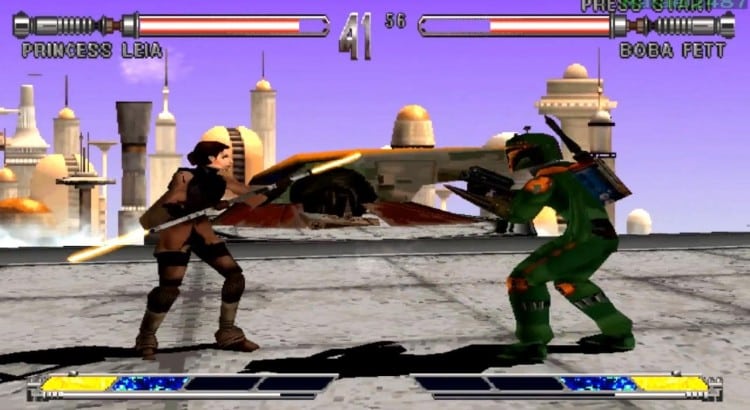 The concept of a Star Wars fighting game is definitely an exciting one. Even less-than-rabid fans of the series have to agree that the thought of conducting epic light saber battles definitely sounds like a great idea. Unfortunately, Masters of Teras Kasi fails on many levels, resulting in a game that could have been incredible but instead is filled with disappointment.

The storyline takes place after the destruction of the first Death Star. The Emperor’s growing annoyance at having been unable to crush the Rebel forces that are responsible, presses Darth Vader to enlist the aid of Arden Lyn, Master of the ancient fighting art, Teräs Käsi. Teräs Käsi draws its energy from the Force, which increases the powers of the Jedi. However, those who dismiss the Force as a “hokey religion”, are able to pick basic combatants (Such as Han Solo or Boba Fett) and fight alongside their allies. Before Arden Lyn is able to take her plan into full effect, the Rebels learn of Vader’s newest plot, and begin training. With the stage set, the battle for survival begins.

There are about 13 different characters you can choose to play as in MoTK. The eight regular fighters are as follows: Luke Skywalker, Princess Leia, Han Solo, Chewbacca, Boba Fett, Thok the Gamorrean Guard, Hoar the Tusken Raider, and Arden Lyn. Through gameplay and completing the game at various difficulty settings, you can also play as a Stormtrooper, Jodo Kast, Princess Leia in her slave outfit, Mara Jade and Darth Vader. While these characters are very similar to the original eight, there are the occassional differences which set them apart. Besides, the characters look really good, and are an interesting selection.

The character graphics ok terrific, ranging from the swamps of Dagobah to the ice planet of Hoth. Some backgrounds feature a lot of movement, including flying snowspeeders and walking AT-ATs. The game’s sound is very good, but that’s no surprise, although it’s a safe bet that John Williams’ score was not written for chop-socky action, it surprisingly adds to the overall intensity of the fighting.

The game itself plays like it’s stuck in slow motion. The characters don’t move very well, the moves and combos are sluggish and uninteresting, and the force powers make the game very unbalanced. One of Luke’s force powers is to throw his light saber at his opponent, which jacks the victim up for around half of his life bar. The move is also unblockable and unavoidable. So if you’re fighting a fully charged Luke, you have to stay close at all times, or else you can just kiss half of your life goodbye. This and other annoying moves (Boba Fett’s got one that makes missiles rain down from the sky, pounding his opponent into the dirt) make the game frustrating in all modes.

Hopefully, Disney will consider a sequel for this title with even more features, and include more characters from the ever-expanding universe. Perhaps Lando Calrissian, Obi-Wan Kenobi, or Greedo. Even C-3PO may feel the need to stop being polite all of the time and take down a Jawa or two. Just make it feel more like Street fighter please.