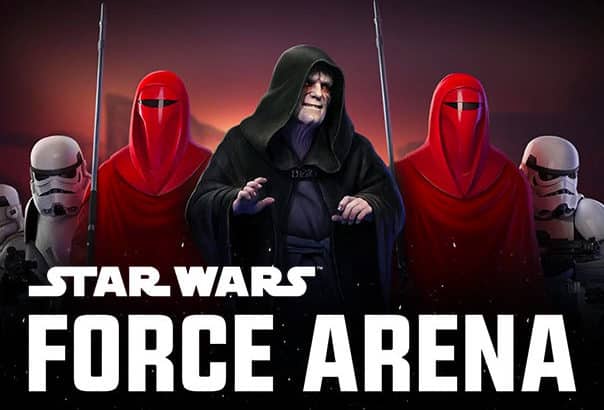 Another update is here! In this update,  the Star Wars: Force Arena developers have focused on improving the balancing of the game that will hopefully bring balance to the Force and give more exciting experiences in the arena. Other improvements with the Recommended Guilds List are implemented as well, so check out more details below:

All numbers listed in the balance details are based on the cards at Level 1.

As one of the strongest Legendary cards and one of the most loved Dark Side Leaders in the game, Darth Maul’s Skill allowed players to play more aggressively. A large portion of players have shared their sentiments about him and we are therefore increasing his Passive Skill Cooldown to challenge players to plan out their strategy more carefully since it may now be risky to charge towards turrets.

The Imperial Heavy Gunners have low health and high cost, making them risky to use. With the right combination, however, they are still effective because of their high DPS. To help overcome this, their attack preparation will become faster to be more effective towards units with higher health such as the AT-RT Walker and Urodel Resistance Fighter, to name a few.

It is evident that Anakin Skywalker is an aggressive Leader. Not only is he powerful, he is also able to adapt to almost any situation in battle, which is why many choose him as their Leader. We would like to make some adjustments, but at the same time, not cripple one of the most sought out Leaders in the game. With the reduced stun duration during the end of his Normal Attack, opponents will have a better chance at escaping, rather than waiting to be eliminated.

More new Leaders have made some of the original ones that came before less attractive, one of which is Lando. His Skill may be a gamble, but it is still useful especially if you want to get a card you just used. Therefore, its cooldown time will be decreased to emphasize this strategical advantage.

Our favorite droid in the recent trilogy movies is not shown the same love in the game as we hoped. Players who use Poe Dameron usually leave BB-8 behind because of its low combat performance, but its hacking ability is helpful when faced with General Grievous and a deck mostly consisting of tech units. Because of this, its Energy Cost is reduced and the hacking time is adjusted.

Designed to be weak against most support cards with Area of effect damage, the Talz Marauder Army is efficient, but not as efficient as we thought they would be. With the adjustments made with their Movement Speed and Deployment Time, they can quickly surround the enemy and their attacks will be more effective with the Attack Speed adjustments.

We noticed that not many players use the Resistance Grenadier. With the advantage of being able to stun enemy tech units, it needs to be used with other units in order to survive for a long time. It’s hard to get a right combination with other units because of its high Energy Cost, so the Energy Cost has been reduced.

One of the most commonly used card of the Light Side and the most despised card of the Dark Side, the AT-RT Walker is an ultimate opponent with its high mobility and high health and damage, making players feel it has no weakness. We have heard your feedbacks, and so, its health will be decreased causing those in the Light Side to have it be used in a strategical method, rather than just deploying the unit.

In the previous update, the Recommended Guild List was improved to promote active Guilds.

Hearing everyone’s feedbacks, improved Recommended Guild List is now displaying guilds which use a same language as you do.

* For Squad Leaders who received Season Rewards lower than the Tier they were in at the end of the Season due to this issue, the missing amount will be sent in the Inbox.