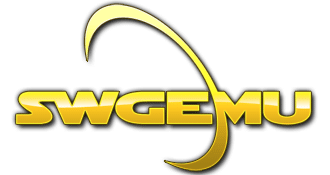 Have you played SWGEmu yet? We’re looking for your thoughts on it as Star Wars and SWG fans. Late last year I wrote a post about the SWG emulator and what SWG fans could expect from it.

Guest Tosche Station actually posted a comment to that original article recently that we thought deserved its own post since it was so lengthy and well thought-out.

If anyone reading has an interest in playtesting for SWGEmu, there are a few things you should keep in mind;

1). If you’re never played Star Wars Galaxies at all, you’re gonna have a bad time. The SWGEMU community is comprised of diehard SWG players who put on a good show of being friendly and helpful, until you start asking questions they don’t know the answers to. Then you’ll discover just how insular the SWGEMU community is, and the fact of the matter is that the majority of those diehards are every bit as clueless as you are.

2). If you played SWG, but not until after the Combat Upgrade or the New Game Experience, you’re gonna have a bad time. The Combat Upgrade was implemented for a reason, and it wasn’t because SOE’s development team were idiots…..it’s became combat in SWG at its inception absolutely sucked. And you’re going to find that out, and you’re going to be amazed at how so many people are willing to devote so many hours (we’re talking THOUSANDS of hours here) into hardcore grinding using the pre-CU combat system. They’ll cite nostalgia and how REAL SWGers did things the hard way uphill in the snow, and you’ll slowly back away and rethink your own life.

3). If you’re interested in SWGEMU for the 3d space combat, you’re gonna have a bad time, because it isn’t implemented yet (as of July 2013), and I doubt very seriously it ever will be. The developers say they’re committed to implementing it, but consider this. They still haven’t figured out how to get droid and creature pets to work. They still haven’t figured out how to get monsters from following your character all the way across a world, into a city, even into a cantina. My heart tells me it will be a very long time before these gamebreaking issues are addressed. Don’t count on ever flying your TIE Fighter or X-Wing.

4). If you don’t have an exceptionally thick skin, you’re gonna have a bad time. The SWGEMU deveolpers and “staff” (i.e. volunteers who don’t get paid, and will go out of their way at every opportunity to remind you of this…) aren’t the most cordial human beings on the planet (to be perfectly honest, they’re condescending jerks; classic IT and network administration), and God help you if you dare to ask a question on the forums that’s addressed in the stickies at the tops of the page (sandwiched into links to 8+ year-old guides that are almost completely useless in the SWGEMU environment). From the developers to the forum moderater(s) all the way down to the more vocal guild leaders, you should be prepared to deal with people who hate themselves almost as much as they hat e you. And believe you me, they WILL get under your skin, taking out their own frustrations on anyone who dares voice concerns over the project. The concept of “fun” is apparently alien to everyone involved, and they view SWGEMU more as a technical exercise to see just how much they can emulate a game, caring not one bit if anyone playing actually enjoys it.

5). If you’re expecting a gameplay experience that’s even halfway playable, you’re definitely gonna have a bad time. The developers, for whatever reason, have chosen to put playtesters in the environment long before they should have, resulting in a “game” in which one is constantly working around game-breaking bugs and unimplemented features on a daily (realistically, hourly) basis. Want to build droids? Well you can build their parts, but you can’t make them, sorry. Want to have a pet womprat? Sorry, you can’t. Want to use camouflage kits? Nope. At this point, pretty much all you can do is spam 1 or 2 attacks until your enemy is dead….about as much depth as Clone Wars Adventures, except with dated graphics and no space combat. It’s a constant guessing game levelin g up about which skills actually work and which are broken. Don’t waste your breath asking other players either. An alarmingly sizable chunk of them have been spamming skills that have never worked for months and don’t even realize it.

6). If you suffer from OCD, are unemployed or a stay-at-home mom, spend all your free time on the internet, or generally have absolutely nothing better to do, then I think you’ll fit right in the SWGEMU community. I honestly don’t mean to belittle the players (or the staff for that matter, although they most certainly deserve it), you just really need to know what you’re getting into. Don’t expect a strong sense of community….try to understand, Star Wars Galaxies was a game that was designed to be played away from keyboard, and that hasn’t changed in SWGEMU, in fact it’s intensified. Other than meeting up to get buffs, or buy goods, most SWGEMU playtesters do so by themselves, using two of their own characters at the same time (which was not possible in the actua l game, and all this accomplishes is a false inflation of total participants). SWG was notorious for being a hardcore grinding game, with no content and even less reward. But it unquestionably has its fanbase.
SWGEMU is monetarily free, but you will pay a hefty price in time, frustration and futility. It will never reach its “goal” of achieving total emulation of the game prior to the combat upgrade, which is perfectly understandable…after all, they’re reverse engineering (at least they say they are) billions of lines of code to recreate the game from the inside out, and as they’re keen to point out at every opportunity, they’re doing it for free. But realistically, SWGEMU probably won’t even reach 50% of its “goal”, at least not within the next year or two (more realistically 5 years, and there probably still won’t be space combat or pets). By all means give it a try, but don’t expect….well don’t expect anything at all.

Do you agree with all of this advice? Thanks so much Tosche Station for your insights.