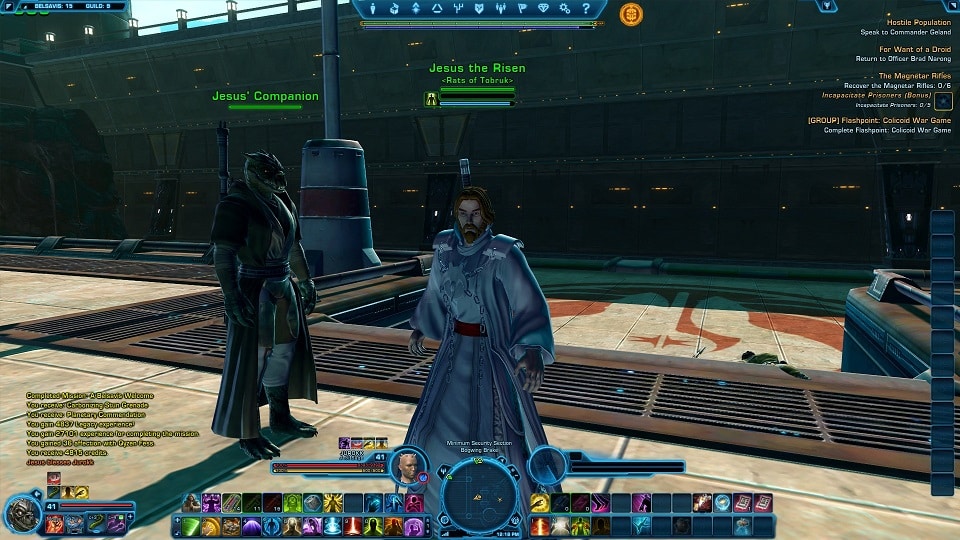 I started playing WoW back in 2005. I played an enhancement shaman almost the entire time until I stopped playing about a year ago. I’ve seen what started as a really terrible, unfocused class spec dramatically improve, get tweaked, and finish off into mediocrity. Coming from that experience I’ve been very pleased with SWTOR ‘s handling of classes, specs, and especially PVP. This is a brain

Back in classic WoW, enhancement shaman had two active abilities. I would use one, use the other, then wait for the cooldown to end. In a group my job was to cast a buff or two and keep it up. Our spec was shit. All shaman had to be healers if you were in a serious raid. There was no gear itemized for my class and my class sets were useless. Of course I didn’t know any better and I was playing with my friends, so I got enough enjoyment out of it.

Burning crusade was such a boon for enhancement. We went from buff bots to central DPS characters. Not only could we finally hold our own against other DPS classes, we still provided very valuable buffs. If you knew how to spec and gear, you could get in the top 3 damage in most raids. I spent a lot of time theorycrafing and gathering gear to optimize my damage, and I was rewarded for it. Our gear sets made sense for the first time. I’m definitely one of those that found Burning Crusade to be the best expansion WoW had.

Since Lich King, Blizzard has been homogenizing classes. I still spent the same amount of time or more getting my character to the very best it could be, but I was just mediocre in damage and my buffs were replicated by at least one other class in the raid. I felt like in spite of all my effort, you might as well bring along another rogue or mage.

Through all this time, Enhancement was one of the worst PVP specs. Blizzard said explicitly that not all specs would be good for PVP and you should respec, dummy. Having spent 6 years as enhancement, I was a terrible healer (healer is the pvp spec.) I found that with a lot of time and gear I could hold my own, but there was never a chance for me to be a high-level arena player. I only ever saw one enhancement shaman in the national finals and there was just about never one in the top 100 that I remember.

Blizzard never balanced for 1v1 combat and barely balanced for 2v2 combat. On the small scale it became a game of rock-paper-scissors-spock. I could kill priests, druids and I would stalemate, and paladins would kill me. Then there were rogues that could kill just about anyone. I couldn’t believe blizzard thought it was a good idea having a class that, with equal gear, would almost always win in one-on-one combat. I still did battlegrounds, but it was just too frustrating to go into the arena.

After a year or so without playing any MMOs I started SWTOR.

The leveling experience was better. There were still the kill 10 boars quests, but they felt more integrated into the other story driven missions. The character interaction at the end of the quest made up for any boredom from doing it. I enjoyed really feeling like a bounty hunter. People would come to me with quests and offer me money because they knew I was a bounty hunter. It all felt more personal and tailored. SW quests don’t quite flow as well as WoW’s. In WoW you would never have to visit an area twice since you’d get all the quests for that area at once. SW’s quests are more scattered. At least SW incorporated the hand-holding quest map. I absolutely loved having a companion character with me at all times.

Through all my leveling I PVP’d a lot. Unlike WoW, in spite of being a tank, I felt useful. I was boggled how well my utility played into Huttball and my survivability played into the other warzones. Purely PvE skills like taunting were incorporated beautifully into PvP. Gear and level disparity were minimized by putting everyone at at minimum power level and HP. The high-level people had more utility and skills, but I could hold my own. The level 12s were easier to kill, but they were still a threat if I let my guard down. I really feel I could play any spec in any class and have a place in the warzone. There was never one class or spec I felt would /always/ kill me or vice versa.

My server has a fairly low raiding population so it took some time to start operations. Once I did I was pretty satisfied with how they tuned the encounters. I felt like gear mattered, but you didn’t have to tweak every last stat to progress. Classes all had something to contribute in their own way, but you didn’t feel you had to take a sniper over a sorcerer for example. Several encounters were all about player communication and skill where gear didn’t matter.

Looking back I found that SWTOR is much better for me at this point in my life. I have a full time job, a non-computer hobby, and I’m in a committed relationship. SWTOR has enough depth to warrant playing twice a week, but I can see getting frustrated with it if I tried to play every day. SW equalizes the playing field enough that you don’t have to grind factions, badges, crafting, and dungeons to earn a place in a raid. With the first tier of epic gear you’re ready to start raiding successfully. However, if you do spend some extra time, you’ll notice a difference in your performance and you’ll have an easier time.

If SWTOR came out during Burning Crusade I would have played it for a couple weeks and given up. I had a lot more time and it would have been much better for me to play a game that had limitless faction and token grinding, unforgiving raids, and a class that really needed to be optimized to be viable. But now? I get to raid and PVP as much as I want and be pretty good at it because I’m a good player. I’m not limited by poor design decisions that make me work so, so hard just to stay competitive. It doesn’t provide the 40-hours-a-week playing time that WoW could, but I simply don’t need that anymore.