Here are the latest update details from Star Wars: Force Arena.  This time  there will be 2 new cards and a host of balance changes! Let’s get straight to it then!

Two new units are being added to the game. The Scout Trooper [Galactic Empire] and the Mobile Ray Shield [Rebel Alliance] will be added in this update.

Scout Troopers
Scout troopers are specialized soldiers that excel at reconnaissance and infiltration. Their light armor, superior mobility, and their renowned marksmanship make these troopers extremely effective at dealing with enemy threats. 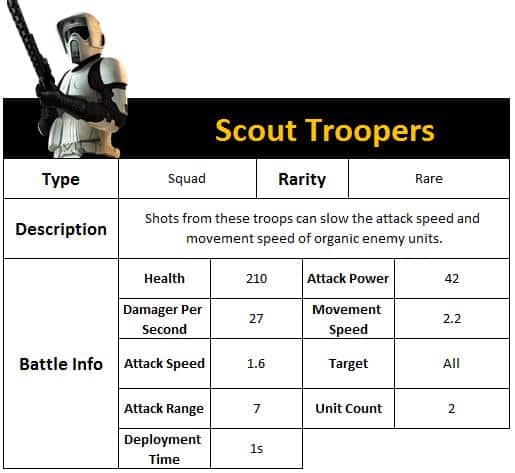 Mobile Ray Shield
The Mobile Ray Shield was built to be portable and is effective when used in large-scale battles. This mobile shield generator creates a barrier instantly upon deployment and protects allies within its barriers from external blaster fire. 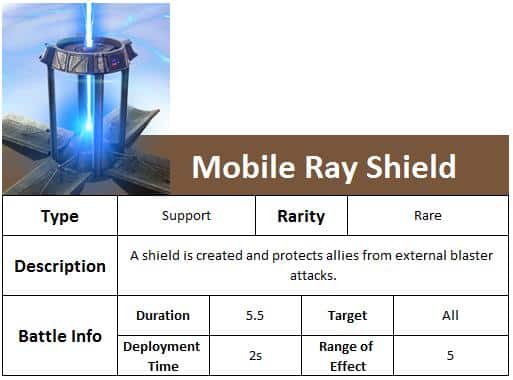 As well as these two new units, there will also be a round of balance changes. These balance changes are aimed at taking certain characters down a notch, as well as bringing underutilized cards back into the fold.

▶Skill Damage reduced from 300% to 250%
▶Modified the skill so it can no longer be interrupted by himself.

The TX-225 Assault Tank has been underutilized for quite some time. The animation for the Assault Tank to start it’s attack was far too long for it to be viable. To give the TX-255 Assault Tank a fighting chance against the MTV-7 Light Vehicle and the AT-ST, a few changes have been made.

The Imperial Jump Troopers have been an incredibly niche pick for some time.  He has had some moderate success however he is still in a very tiny pigeonhole of useage. We are going to be making a few adjustments to make him a little more versatile.

The Dioxis Grenade is a very powerful and flexible tool in the Empire arsenal. However we feel that it is currently a little too wide reaching, and therefore we are reducing the radius of the Dioxis Grenade.

▶Effect Radius reduced from 8 to 6

▶Effect Radius reduced from 8 to 6

Baze has had somewhat of a good showing these past 2 weeks. We have been monitoring his performance and he still isn’t quite as good as we had planned. We will be giving him an animation speed increase to allow him to deal his damage more effectively.

▶Buster Shot Skill’s firing animation is now 50% faster
▶Modified the skill so it can no longer be interrupted by himself.

Lando Calrissian has been a top pick for the Rebel Alliance for quite some time, however we feel that he is incredibly weak and awkward when he is attacking. Due to this, we are bringing some overall improvements to his basic attacks to make him feel more like a leader.

Princess Leia has been on the receiving end of a few improvements lately, however we have received a few comments that her play style is still a little odd. Her attacks are too slow, and the motions feel unnatural. Due to this, we will be making some changes to her basic attack.

The Bantha Rider has had a somewhat mixed reaction from players. Although the card is a great tank, it just doesn’t have the same kind of punch as the Dewback Rider. Even more so when the rider disembarks his noble steed, and tries to enter battle. The poor Rebel Trooper on top of the Bantha will usually perish incredibly quickly. We will be adjusting the rider on top of the Bantha as a way to give him a little more longevity in battle.

The Keredian Partisan has found his footing recently, and has seen a lot of play. When he is used, he tends to create an almost overwhelming win condition, and trades favorably into almost anything. Because of this, we will be trimming back his attack power slightly.

The Phoenix Squadron is a newer card that sees very little play, and even when they do see play, they seem to be largely ineffective. We will be increasing their stats in order to let them see more play, and make them more useful going forward.