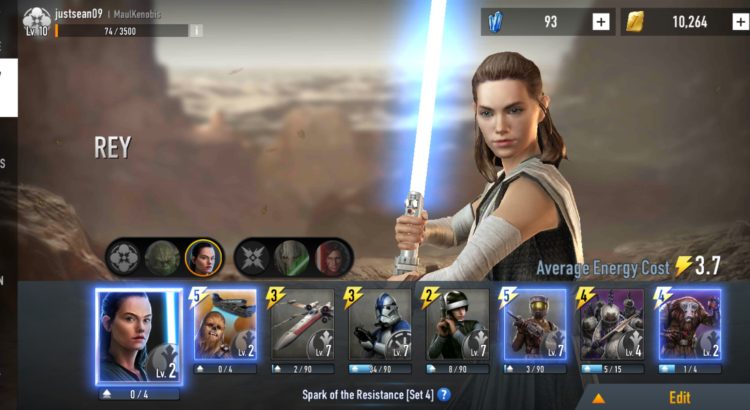 Star Wars: Force Arena will be undergoing a server maintenance to implement the 3.2 update and other improvements.

New characters and in-game changes have been added to make your Star Wars™: Force Arena experience even more dynamic and exciting than before! Check out the details below:

During the update, you will not be able to access the game. Please make sure to link your game account to your social media account to secure your data.

Below is the details:

– Enfys Nest and Weazel can be unlocked upon reaching Tier 10 (Aurodium Challenger) in the Light Side.

– Moloch and Rebolt & Syke can be unlocked upon reaching Tier 10 (Aurodium Challenger) in the Dark Side.

– The details of each new card are based on Level 1.
– Details are subject to change. 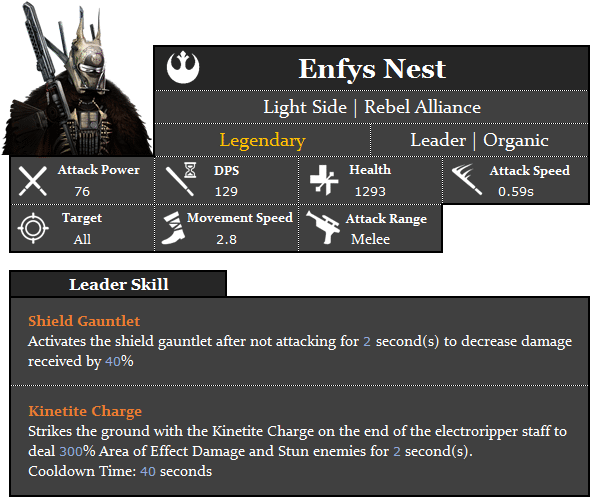 An infamous pirate, Enfys Nest has been responsible for raids and looting of cargo transports throughout the Outer Rim Territories. Since Nest’s identity is a mystery, her age, home planet, and species are all unknown. The one thing that is clear, however, is her very aggressive fighting style. Her Kinetite Charge attack and the strong defense that her Shield Gauntlet provides are enough to inflict terror on the Imperial army. Lead the Rebels to victory with the power of Enfys Nest!

▶ Use her skill “Kinetite Charge” to push away and stun enemies when they surround you.

▶ Not attacking for a certain period of time activates “Shield Gauntlet” which reduces the damage you receive. Once you start attacking, the shield effect will disappear.

▶ Enfys Nest can be unlocked upon reaching Tier 10 (Aurodium Challenger) in the Light Side.

Weazel, who used to be a thief in Tatooine, became a freedom fighter to overthrow the Empire. Enfys Nest trusts him as her best lieutenant and spy, as well as a key figure amongst the Cloud-Riders. Using a special launcher that fires a hook, he tows away enemy leaders and eliminates multiple enemies at once with an exploding rocket. Fight the Empire with the versatile Weazel!

▶ Attacks enemies from a long distance using a special rocket.

▶ Launches an exploding rocket that can deal damage to large numbers of enemies.

▶ Fires a hook to pull back fleeing enemy leaders in order to finish them off.

▶ Weazel can be unlocked upon reaching Tier 10 (Aurodium Challenger) in the Light Side. 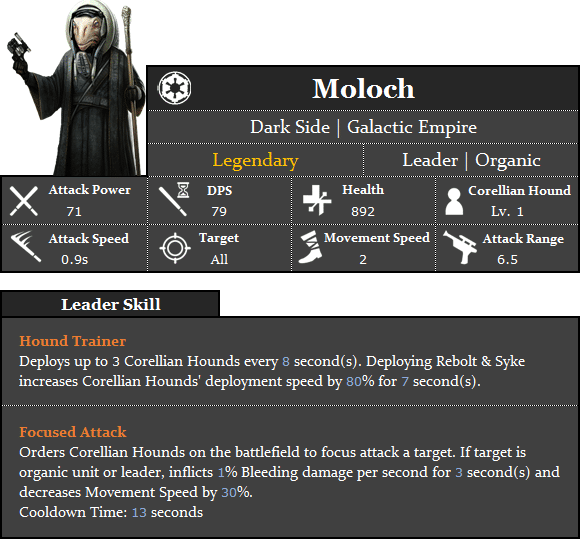 Moloch is a member of the infamous White Worms gang in the black market of Corellia. He is loyal to the gang leader, Proxima, and he will do anything to fulfill the orders given to him. Moloch periodically summons and fights together with the Corellian Hounds. He also has the ability to command the hounds to make a concentrated attack and easily deal with an enemy. Let the Rebels know what terror is with Moloch!

▶ Attacks enemies with a blaster pistol from a distance.

▶ Use Moloch’s skill to command the Corellian Hounds into a focused attack to deal with powerful enemies.

▶ Hounds that are affected by “Focused Attack” inflict Bleeding damage and decreases movement speed if the enemy is an organic unit or leader.

▶ Moloch can be unlocked upon reaching Tier 10 (Aurodium Challenger) in the Dark Side. 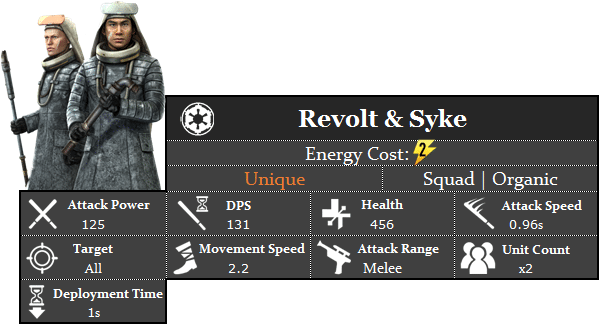 Revolt and Syke are members of the notorious White Worms gang and famous thugs in the streets of Corellia. They are Moloch’s faithful followers who are ready to do anything to achieve their goals. When Revolt and Skye are on the battlefield, Moloch can summon Corellian Hounds at a faster rate. Eliminate all obstacles blocking the Empire’s path with the special duo Revolt & Syke.

▶ When using the “Revolt & Syke” card, Revolt and Syke will be summoned at the same time.

▶ Attacks the nearest enemy with a club.

▶ Revolt & Syke can be unlocked upon reaching Tier 10 (Aurodium Challenger) in the Dark Side.

Improvements have been made so that using Era Set Bonuses are easier and the cost of unequipping Datacards has been reduced.

When you unequip a Datacard, Credits will be used instead of Crystals. 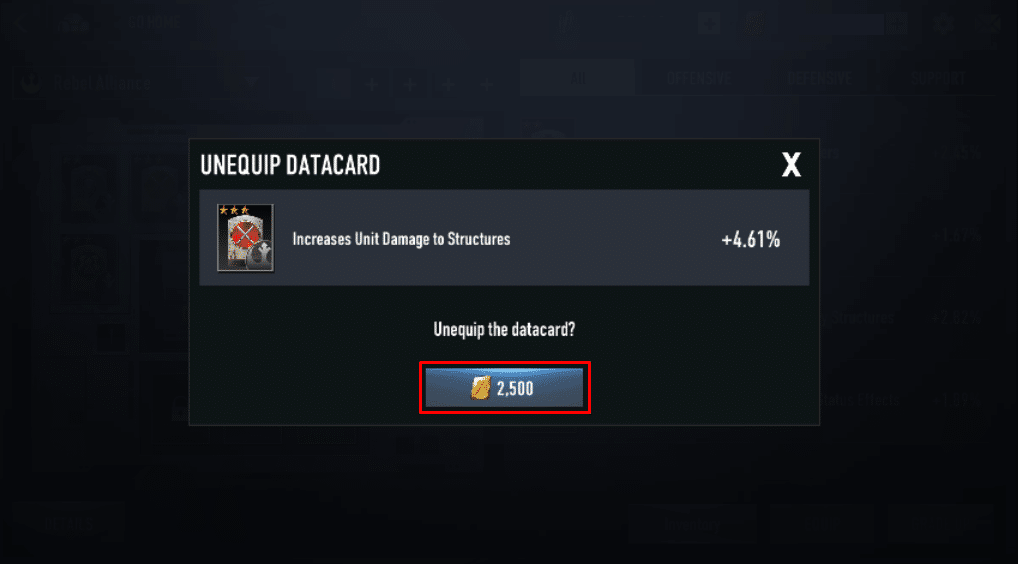 The required quantity and level of Legendary and Unique cards have been lowered to make it easier for Squad Leaders to unlock Datacard slots. 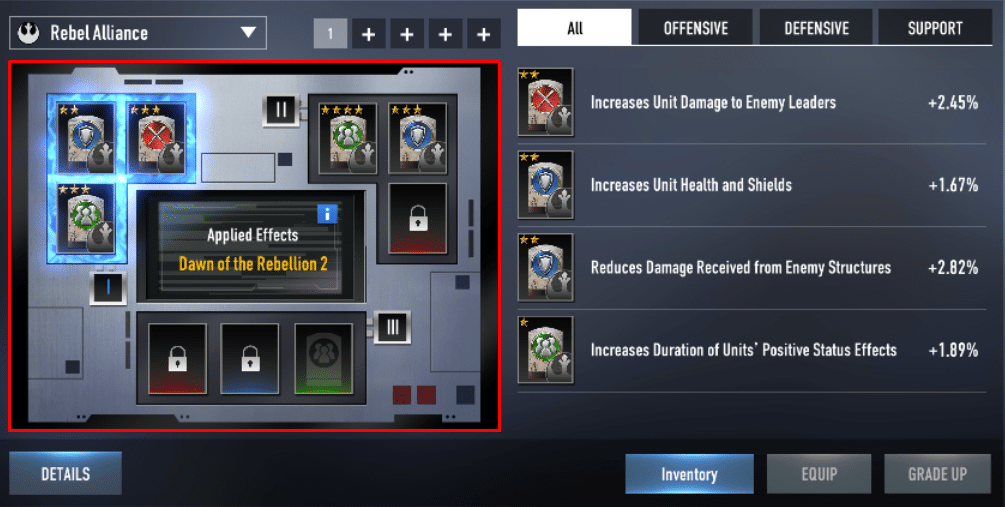 The amount of Credits needed to Grade Up a Datacard has been lowered. 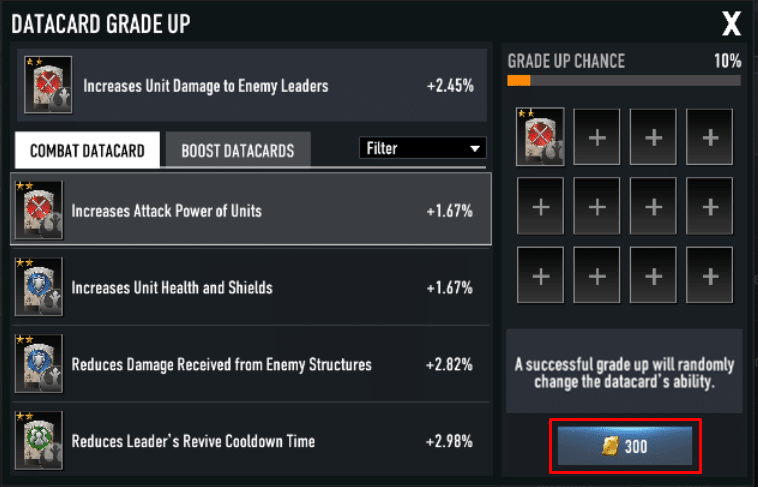 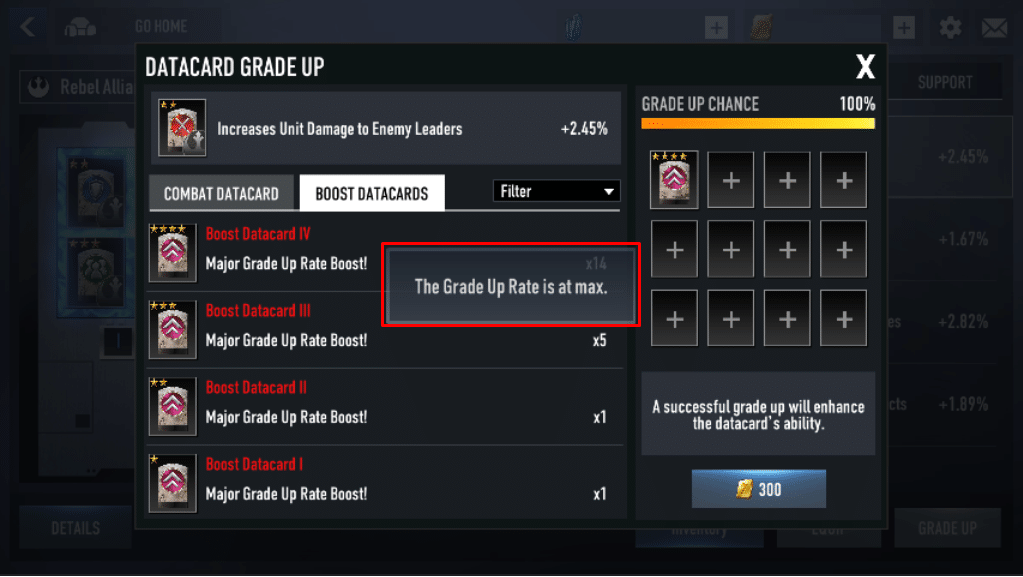 – When the Grade Up chance of a Datacard is at 100%, a notification will be displayed. 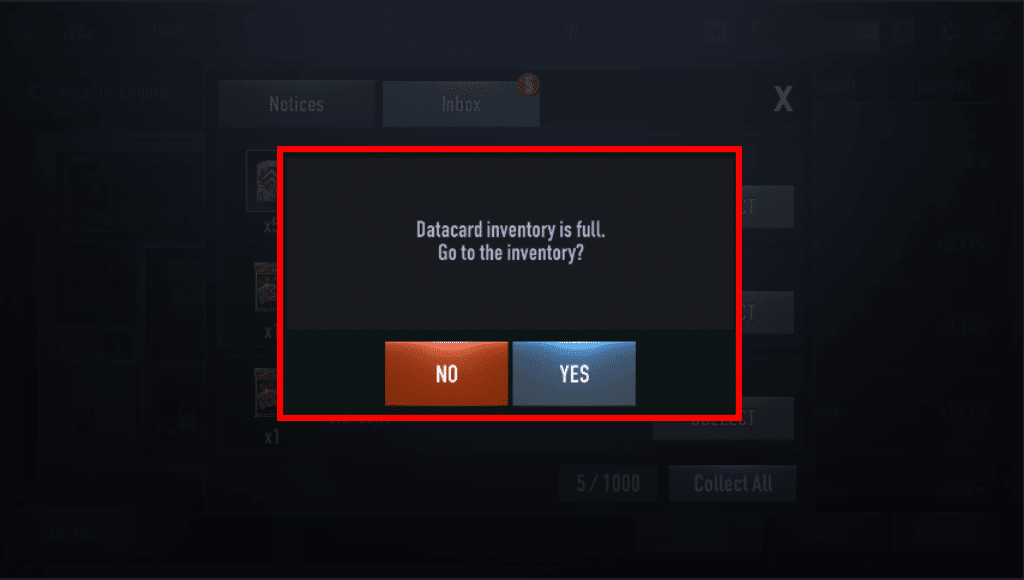 – If the Datacard inventory is full, a notification will be displayed.

Datacard Quest has been improved in this update.

– The number of attempts will no longer be deducted if you fail in the Datacard Quest.

Users can now charge the play count a certain number of times without having to consume Crystals every time you enter.

* The number of entries on a single play count charge will be the same as the number of free entries.

Improvements have been made to the Deck Editing screen to make card disassembly easier.

Home Screen → Deck Screen have been changed to display the current Perk Points you have. 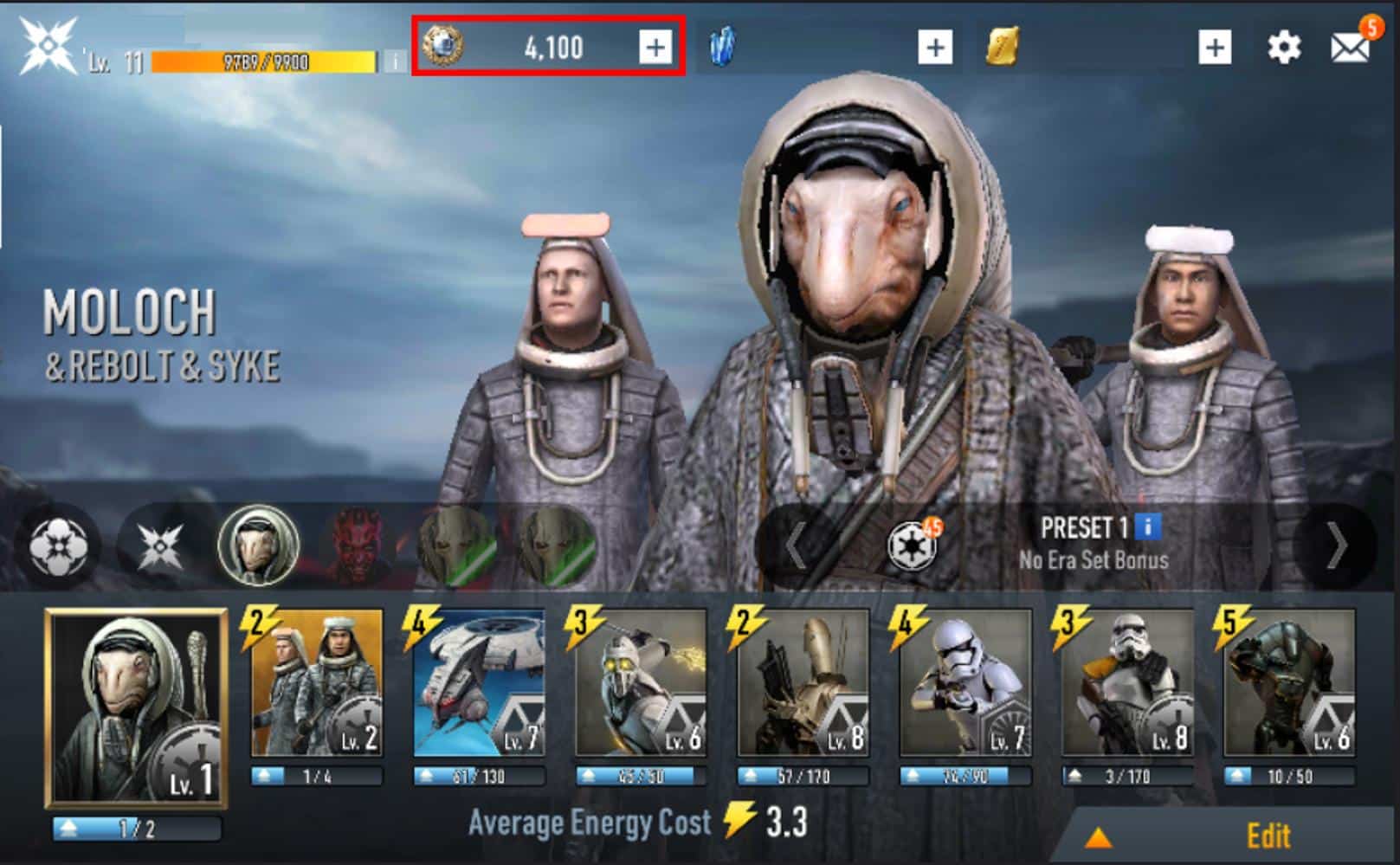 If you want to deconstruct a card, you can tap the [+] button on the right side of the Perk Points box and you will be taken to the Card Deconstruction screen. 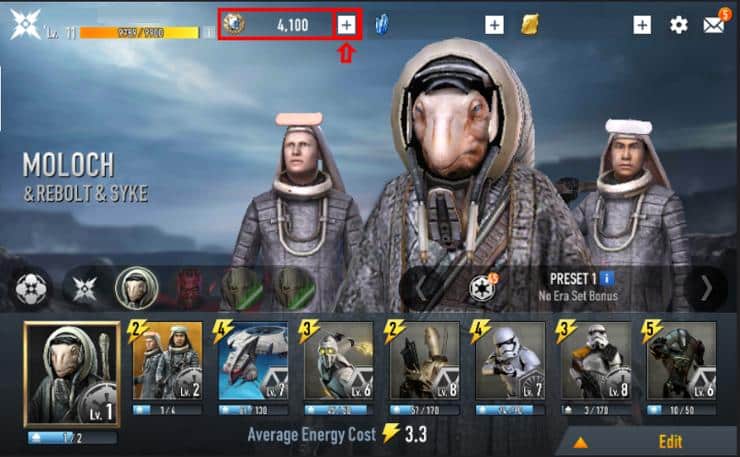 Once the Event Coin event has ended, the amount of Event Coins received will be reflected in your Credits. 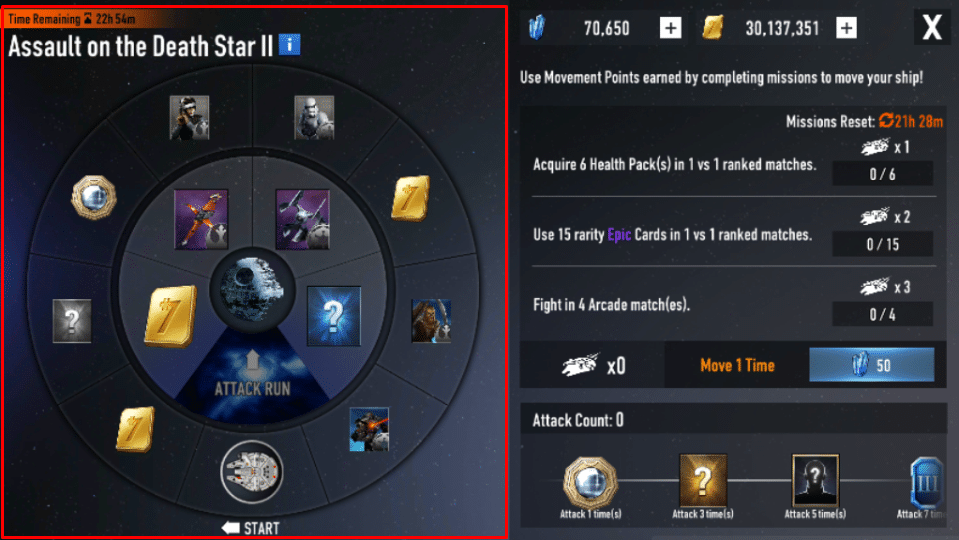 ■ End of sale for some packages

Attention, Squad Leaders! These packages will no longer be sold after this update.

* Crystals available in the Level Up Package will be sent to your mailbox even if the level requirements are not met.

* The packages listed above can no longer be purchased after the update.

Thank you and may the Force be with you!