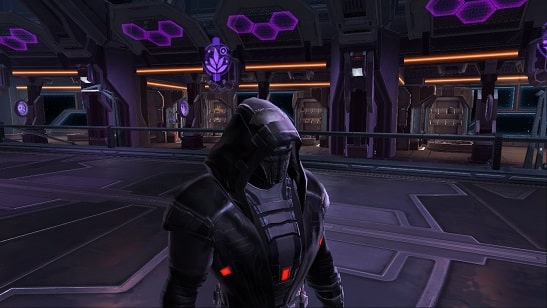 Eric Musco posted an update on the official forums yesterday regarding hood toggle. Eric replied to a user named Pingonaut who had the following question:

It has been more than two years since the game launched, and that’s two years of players asking for a way to toggle the hoods on their outfits. In this Community Q&A from February 2012 we were told that the hood toggle likely be in the next major patch after Game Update 1.2. Delays are acceptable, this is not.
He even goes so far as to say that the functionality will be available for our companions, as well. This means that the feature was being tested and worked on enough to where they could release such information. If there were problems or bugs with the hood toggle option that kept it from being released, why not tell us? Why just leave us in the dark, waiting for a word about it for two years?
Why did they suddenly stop talking about it? Did they forget? Were they hoping we would forget? Just give us some explanation. Be it good or bad news it cannot be worse than knowing nothing at all.

Here is Eric’s reply:
Hey Pingonaut,
I know that hood toggle is something we have talked about intermittently at some cantina tour events but I know we haven’t made a more “formal” reply about it on the forums. We know that this is a feature that some players really want to have as another method of customization for their characters. As it stands right now, this is not a feature we are actively working on. However, I can tell you that our team also has interest in this as a feature and it is something we regularly revisit to try to fit into our development schedule. Unfortunately it just isn’t something that is in the cards at this time.
Hope that answers your question.

I you wonder whats so complicated about this, SWTOR_Miner posted a pretty interesting speculation post about this a while back:

I’m going to talk about hoods, but some of the same stuff applies to the “backpacks” as well.

The hood toggle feature is likely being held up by implementation issues. Just like the portable crew skill trainer. They couldn’t get it to work with a high degree of polish, so it was put on the back burner.

If I had to speculate, the main sticking points would be how to handle helmets that explicitly don’t allow hoods, how to pass the hood state, and Twi’leks.

The helmet/hood compatibility list is most definitely not exposed in any usable way to the UI based on how it appears to be implemented. That problem might be solved by adding a new data value to every helmet’s item entry. Though I’m not sure how easy it would be to implement a UI override to the helmet/hood removal system. It seems to be implemented pretty deep in the rendering engine as a series of rules based on mesh names. If you solve this issue, you have to deal with the next one:

How do you pass the hood up/down/remove state to other clients? Well they already pass the dye matching state for each item slot. So, you wouldn’t even need to implement a new system. Just add an extra hidden slot, and pass the state in the same way you pass the dye information. Have a placeholder item you put in the hood state “slot” based on whether you want to remove it or not, and use the dye match state to pass the up/down state. But, that leads into the biggest problem by far:

How do you handle races like the Twi’lek? The hood models they have wouldn’t even work with the Lekku positioned to the front. So, do you implement the feature knowing one of your playable species will have Lekku clipping issues? Or do you go back and design Twi’lek-friendly hoods, for every chestpiece with a hood in the game and all 8 possible body type models of that item? Not to mention the work to make an item capable of overriding the Lekku’s animation, and force them to the front of the character.

So, it might be something that they’re working on. But, it’s not as simple of a problem as it initially appears. I hadn’t really stopped to think about it till the other day when I off-handily stated in an interview how easy it would be to implement such a system. It would be very easy to implement if you didn’t care how well it ACTUALLY worked.

So while we still have no clue, this might be a pretty interesting explanation on this.