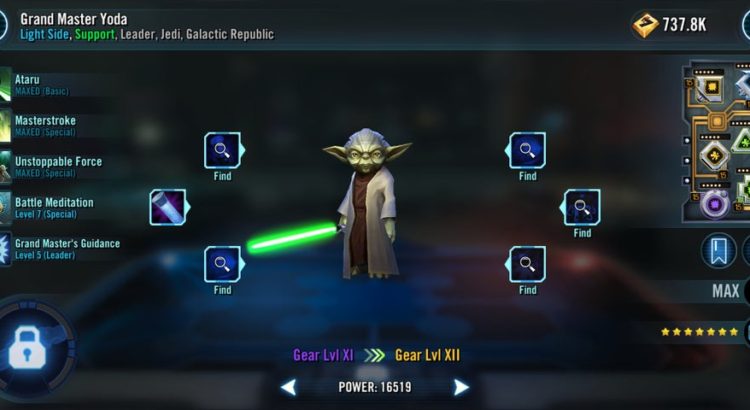 The guys over at CAPITAL GAMES has posted another installment of the Road Ahead in Star Wars Galaxy of Heroes.

In this post they are discussing some exciting changes the developers have planned for future content in Galaxy of Heroes.

New Trilogy Content
While the Light Side Territory Battle for Geonosis completes this current chapter for Galaxy of Heroes, we’ve been delighted from all imaginative Clone Wars squads you’ve built. But for now we are transitioning to the New Trilogy and, like all of you, we were incredibly excited to see the final trailer for Star Wars: The Rise of Skywalker! We’re looking forward to having old friends (General Hux) and some new friends (Sith Trooper), kick off our foray into the culmination of the Skywalker Saga! While we can’t release specifics about some of the other upcoming characters and ships, we can tell you that this phase of content will take us well into spring.

Fourth Anniversary
This November, Star Wars: Galaxy of Heroes turns four years old! We’re planning a big thank you celebration for our incredible community to commemorate their long-term commitment to our game, including double drops, a crystal promotion, and a generous thank-you package! We’ll see you on November 23rd as we prepare for our anniversary celebration. Speaking of four years…

The Plan So Far…
Over the last year, our focus has been reshaping the game step-by-step to enable an expansion of elder game content.

Grand Arena Championships was the first step in that process. We wanted a place where players could take their entire collection, based on all of the Star Wars synergies and gameplay metas that have developed over the years, and continue to have them be relevant and fun to play with.

But the game itself is in a very different state than when we started 4 years ago. New players starting out now will not have the same experience as our elder players did when they first started, so we knew we needed to take a look at the early game and make sure that new players had a clear path to reach the most exciting content which starts from level 85. We also wanted to find a way to help them become functional members of a guild (functional, meaning that they can acquire legendary and journey characters in a dedicated way; a concern shared by our elder players). Improving the early game experience will require iteration over time, but we believe we have a good idea on how to tackle it. And with that we present…

The Journey Guide
One of the most challenging aspects of Galaxy of Heroes for new players entering the game is what it takes to get the most popular content and iconic characters. New players face a dense web of interconnected content that must be navigated in order to be able to participate in Legendaries, Journeys, Epic Confrontations, Raids, and Territory Battles. With most of the events not on a visible cadence, it can be difficult to know what to work on and when. We want to help clarify this for our players.

To help new players navigate this deep and exciting part of the game, we’ve been working on a new feature we call the “The Journey Guide”. This new feature will provide clarity and structure for how a player, both new and old, can progress through our content-rich, intricate game. It celebrates the most aspirational characters (and ships) in SWGOH, highlighting their power and place within the game, while helping players to understand how to make progress towards unlocking them. While this will prove invaluable for newer players, elder players will also find that they can leverage this tool in their own pursuit of character unlocks and high-level activities.

Along with this new feature, we’re excited to announce that all Legendary, Journey, and Epic Confrontation events will eventually move into the Journey Guide some time after their initial release. We believe that in opening up our best events and character content, we can not only ease the process for any veterans who are working towards their next legendary characters, but also extend a helping hand to new players as they begin to make meaningful progress in our game using the Journey Guide.
Over the next few weeks we’ll be releasing specifics around the details of the Journey Guide as we head towards its release in December.

The Hyperdrive Bundle
While the Journey Guide gives all players a clear path towards helping them unlock and improve their favorite Star Wars characters, we also want to help new players connect with the GOH community participating in the elder game so that they can play with members of established, highly engaged guilds.

Our solution to this is what we are calling the Hyperdrive Bundle. It’s our most broadly-focused player bundle we’ve ever offered, rewarding characters and resources to both new and veteran players allowing them the ability to level up their collections and jump into some of the most exciting content in-game.

The specifics of the bundle are coming soon, but we can say that new players will benefit from gaining a starting roster of characters as well as increase their overall account to level 85. This, coupled with the release of the Journey Guide, will help these players be positioned to enjoy the most content-rich area of our game and plot a course for them to participate in guilds and elder game content. Veteran players will also receive an incredible deal. Even if they were already level 85 and had most of the characters provided within the bundle, the value that comes from the included gear and resources will be instantly recognizable and more relevant to this elite group of players.

And finally, the bundle will also unlock many of the PvE nodes within the game so that players new and old alike will have the flexibility to chase the characters and resources they’ve always wanted more freely, and with the help from the Journey Guide, they’ll know which path to follow.

We intend this bundle to be a convenient method for players to unlock the full experience of Galaxy of Heroes but as always, the content within this bundle can be acquired even if you don’t spend. We’ll be preparing custom titles and portraits for all the amazing players that were in the game before the bundle was released, as a way of recognizing your place in the history of the game.

The Future
We’re going to be talking a lot about the Journey Guide and the Hyperdrive Bundle over the next few weeks. We want to help you understand how we’re thinking about it and create some opportunities for dialog. We have our normal Developer Q&As planned during this time, where we’ll have a chance to hear feedback from you about the two features. We’ve also got some surveys in the pipe so that we can get your feedback on what we’ve planned. Our hope is for a productive back-and-forth where we can hear your concerns and address them.

I’ll leave you with the following thought: the Journey Guide and Hyperdrive are the beginning of our next phase of the game. After the release and tuning of these two experiences, we’ll be in a great position to develop even more modes, features, and characters for our community of old and new players to experience.

As we head into our fifth year, we’re excited to continue navigating this adventure with you, our incredible community of players. More than anything, we want to thank you for your continued passion for the game.

See you on the Holotables,