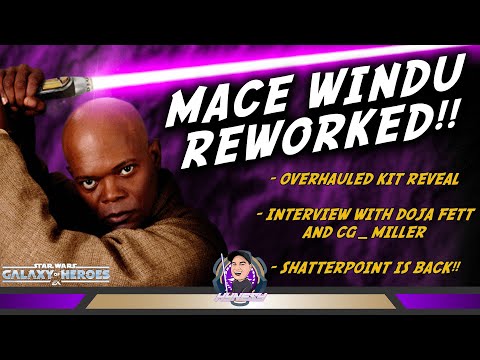 Here is the Road a head for Star Wars: Galaxy of Heroes march 2022

Welcome to the March 2022 Road Ahead for Galaxy of Heroes! We have a packed schedule for today starting with details on the next Title Update which contains a number of big quality of life changes for Grand Arena Championships. We’ve got the details on the Razor Crests final farm location, a very special rework, a new legendary character and more! Check out the video above or read on below! So let’s get this party started….

TITLE UPDATE – GRAND ARENA QUALITY OF LIFE
We have a huge Title Update for Grand Arena Championships at the end of this month. We looked at some of the most common complaints players had about the Grand Arenas experience and hope to address many of those concerns in this Title Update.

The first major change focuses on deploying Defenses with the new Edit Defenses Tool on the Grand Arena Championship screen.

Players will be able to set their Defenses at any time before the Setup Phase finishes. You can even set them before a Grand Arena begins! The squads you set in the Defense Tool are stored between events as well so you only have to set your Defenses once and then update them as you get new units and upgrade your characters. The tool will also update the number of zones you can set as you move between different Divisions and Leagues.

As part of this new feature, one seemingly small but quite exciting change pertaining to GAC sign ups and roster lock. After these changes, players will be able to sign up any time during the Sign Up Phase, but players can re-lock their roster at any time during the Sign Up Phase to update your GAC squads with the latest upgrades and mods. No more waiting until the last minute to sign up and lock your best roster!

There are a few other important changes with this Title Update that aren’t directly related to Grand Arena Championships but will be helpful in a variety of modes.

Just like the recent update to show enemy Squads on the squad setup screen, Fleet battles will now show a preview of the fleet you are facing. And just like the enemy squad preview, this will be visible in all pvp modes with fleet setup screens.

There is one more quality of life item to mention; players can now see which characters have an Omicron indicated by a new badge on character portraits. Just like Zetas, you can now see this on many screens in the game.

All of these changes will go into effect after the next Title Update and will be available for the 4th Season of the new Grand Arena Championships. Who’s heading to the top of Kyber 1 this season?!?

Razor Crest Blueprints
Many of you have been wondering where Razor Crest will land now that it has been out for about a year.

While we are maintaining many ways to unlock Razor Crest, we are exploring a few other options in the future as more Conquest characters come up on their one-year release anniversary.

Jawa Scavenger Update
Shifting gears, the Salvager will be experiencing some big changes! After the next title update, if you head over to the friendly but accident prone Jawa in the corner of the Cantina, you’ll find he’s now offering to craft gear for you. No more holding on to one character at G7 to craft specific gear to break down for Relics! It’s also handy to look at recipes and prepare for your next character unlock.

UNIT UPDATE – MACE WINDU
This party isn’t over Mace! It’s just getting started! By far the most requested rework in Galaxy of Heroes’ six-plus year history, we’re excited to (finally) officially announce a rework of Mace Windu! Mace has also received a Territory War Omicron ability in addition to some substantial kit changes.

Each of Mace Windu’s abilities have been upgraded, and he now has a new additional Special and Unique ability. We introduced the idea of the Shatterpoint debuff for Mace quite a while ago with the short-lived Territory War bonuses and now it will be the centerpiece of Mace’s new kit. Enabling everything from Turn Meter swapping to Stuns to Health and Protection recovery, Shatterpoint will be a critical part of Mace’s new strategy. This rework also introduces a new buff, Resilient Defense, which works like Taunt but only lasts for a certain number of attacks. Mace will be the first character to utilize this buff but expect it to return in the future.

Best of all, this rework is live right now!

Want to know more? Check out the full kit reveal and an interview with the designer for the Mace Windu rework in the video below.

UPCOMING UNIT – LEGENDARY GRAND INQUISITOR
The Inquisition has begun! We introduced a number of new Inquisitor units over the past few months and today we are announcing where that path to the Dark Side leads – the Legendary Grand Inquisitor! While each marquee Inquisitor targets a specific Jedi to take down, the Master of the Inquisitorius has the power to challenge Galactic Legend Jedi in Territory Wars.

The Inquisitorius faction has focused on the new Purge mechanic, and the Grand Inquisitor helps bring this faction to the next level by utilizing Purge to devastating effect. Outside of Territory Wars, this squad will still be a force to be reckoned with, particularly when facing Jedi opponents.

The Grand Inquisitor will be earned from a new Legendary event that will require five other Inquisitors. We still have a few marquee Inquisitors coming to Galaxy of Heroes as we get closer to the release of the Legendary Grand Inquisitor, so stay tuned to the forums for more information on who will be the next Inquisitor!

Thank you for reading and I hope you have enjoyed the March 2022 Road Ahead. We have a ton of exciting plans for this year and will have more to share via the next Road Ahead in June.

Thanks again and see you on the Holotables!