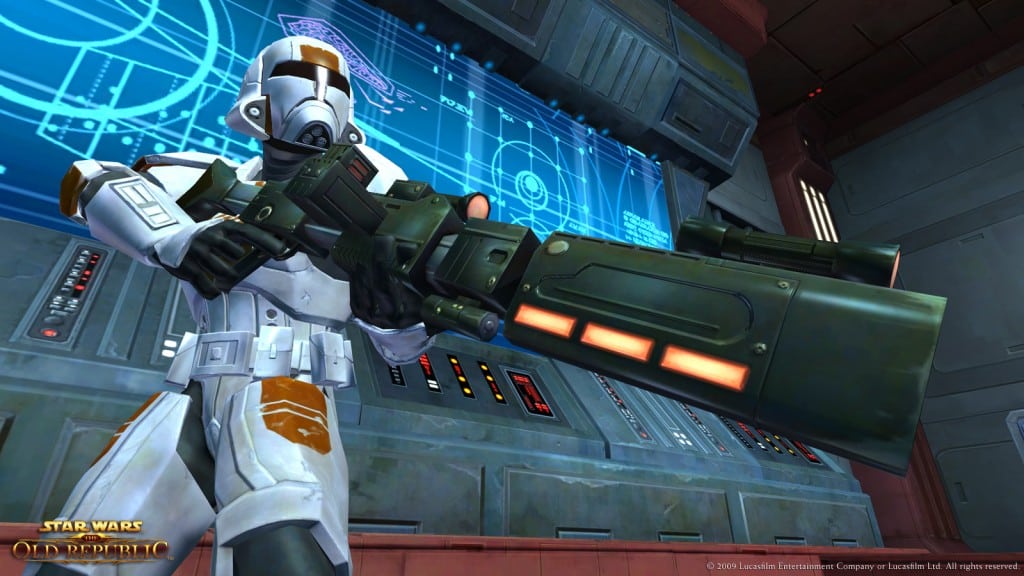 Eric Musco started a new “top 3 Answers” thread on the official forums. This time about Commando/Mercenary. Here is a Summary made by bstr413:

Here are your top 3 answers, returned from the Combat Team!

PvE: Overall, Commando is in a pretty good place in PvE right now, and is at least viable at most levels of content. However, Gunnery is under performing in comparison to the other turret-based ranged DPS classes by a significant, but not enormous, margin. Testing on PTS has shown that this performance gap will still exist even after the changes to Gunnery in 2.7.

Most often, I see the developers hold up Commando’s ability to off-heal as some kind of reasoning as to why it might possible have lower output. The idea of this is absurd, as using global cooldowns on healing abilities rather than DPS in PvE is only going to further reduce DPS output, at the cost of a marginal-at-best benefit to the group. If a class is lacking in its primary role, it will be ruled out in most cases, regardless of what its secondary strengths might be.

We are aware that Gunnery/Arsenal is lagging a bit behind some of the other “ranged turret”, damage-dealing skill trees and bringing its sustained damage up to match that of Assault Specialist/Pyrotech Commandos/Mercenaries is on our “to-do” list. That said, giving Vanguards/Powertechs and Shadows/Assassins at least one skill tree each to provide competitive sustained damage in Operations is currently much higher on our “to-do” list, because Commandos/Mercenaries already have one skill tree that puts out excellent sustained damage in Operations.

We are slowly developing away from the idea that off-healing capabilities should lower the sustained damage output of skill trees that focus on dealing damage. For example, you can currently observe that Scrapper/Concealment Scoundrels/Operatives and Assault Specialist/Pyrotech Commandos/Mercenaries put out some of the best sustained damage in the game, and as you already know, both of these classes can heal. This also goes for classes that can off-tank as well, and an example of that can be seen in the improvements given to Vigilance/Vengeance Guardians/Juggernauts not too long ago.

We will not guarantee that High Impact Bolt/Rail Shot will become free for Gunnery/Arsenal Commandos/Mercenaries (but we might further reduce its cost – possibly to the point of making it free or nearly free). Please feel free to make other suggestions for how you might like to see this gain in Gunnery/Arsenal sustained damage implemented – we will be reading and considering your suggestions.

PvP: There are many people that believe that Commando is in a terrible place for PvP, especially at a higher level. While I believe that the situation is not nearly as bad as that, it is far from ideal. One of the reasons for this belief is Commando’s lack of any real “OH S**T”/”get out of dodge” defensive ability. The recent changes to Sniper/Slinger defensive cooldowns prompted this response from one of the devs:

One of the changes that has generated the most vocal feedback is the change to the Sniper and ‘Slingers defensive cooldown, Evasion/Dodge. We firmly believe that these Classes are lacking in a distinct emergency survive button, something that each other Advanced Class has (either via escapes like a Vanish, or more brute force mans like an Undying Rage)

It is clear that the design intent is to provide particularly vulnerable classes with means to either quickly extricate themselves from dangerous situations, or to straight up mitigate a crap-ton of damage for a few precious seconds. With this statement in mind, Commando has no such ability. Heavy Armor does not provide anywhere near as significant as an advantage as past devs have claimed, and Commando has a very limited set of tools to escape from sustained pressure. Hold the Line appears to make an attempt to fill that role, but it fails to provide the ability to quickly out-distance opponents who are in hot pursuit.

Based on this, it is my belief that Commando would benefit from a ‘disengage’ type ability. Similar to Gunslinger’s ‘High Tail It’, the idea would be to quickly create distance between the Commando and his/her opponents. A tool such as a disengage would round out Commando’s set of survival-based utility nicely, and would provide the class with the “OH S**T” button that it is in clear need of. If you take a look at the PvP leaderboards, it is easy to see that Commando is one of the more difficult Advanced Classes to find success with in a competitive environment.

Are the devs aware that Commando is in need of some kind of emergency defensive/disengage ability, and are they planning on addressing that need in the near future?

Internally, we constantly debate things like this, and as you may have noticed by now, we actually reverted the upcoming 2.7 change to Evasion/Dodge for Snipers/Gunslingers. In general, we are aware that Commandos/Mercenaries have not performed as well as many of the other classes have in the ranked PvP setting. We are committed to addressing these issues for all classes to which they apply, because our ultimate goal is for every advanced class to be competitive in ranked PvP.

As far as getting a new ability is concerned, that is not likely to happen outside of an expansion to the game. However, we may consider improving the existing defensive capabilities for Commandos/Mercenaries in some way that yields the desired boost to their performance in PvP. Our first step is to observe how Commandos/Mercenaries perform after they receive the changes coming in the 2.7 update. After analyzing this future data, we may find it necessary to take actions that further improve the Commando’s/Mercenary’s defensive capabilities.

Again, we welcome the community’s feedback here. Specifically, which existing defensive cooldown(s) would you like to see improved for Commandos/Mercenaries, and what would the improvement(s) be?

Wildcard: Assault spec is one of my favorite DPS specs to play, but it has been faced with several issues on the Commando side of things since 2.0 was released. First, it lacks any real semblance of group based utility outside of a weak slow. Assault Commando would benefit significantly from the addition of a ranged root. This would go a long way to improving the spec’s ability to kite (which it cannot do quite effectively with such a poor slow, and the spec is lacking in non-Resolve-building forms of CC). Just to offer some ideas, I think that Sticky Grenade would be a prime candidate for the addition of this effect. 3s root, breaks on damage after 2s.

There is also some pretty weak synergy with several of the class’s baseline abilities, particularly Hail of Bolts and Plasma Grenade:
– Plasma Grenade, the only baseline non-proc fire DoT that Commando possesses, gains absolutely no benefit at all from any talents within the Assault tree (a fire based DoT tree).
– Hail of Bolts has a 9% damage increase from hitting a burning target, but outside of Plasma Grenade and tab-dotting (incredibly inefficient way of dealing damage) there is no way to maintain DoTs on multiple targets.

In addition, there is also a kind of phantom-internal-cooldown on the ability to proc the Plasma Cell DoT using ranged-based attacks. If you have already proc’d said DoT, you cannot proc it with a ranged-based damage ability for 6s (duration of the DoT). This did not exist pre 2.0, and it currently makes it very difficult to effectively switch targets (you are forced to spend ammo on either Incendiary Round or Explosive Rounds in order to apply a new DoT within that 6s window).

The alacrity talents within the class also do not make much sense. Taking any alacrity will disrupt the flow of the internal cooldown on Ionic Accelerator (procs HIB reset). It was mentioned in the Powertech responses that the alacrity in Rapid Recharge will be exchanged for a crit chance increase.

There are many different issues mentioned in this question, so we will knock out each one briefly with a bullet-pointed answer:

That’ll do it for the Commando/Mercenary answers. Thanks everyone.