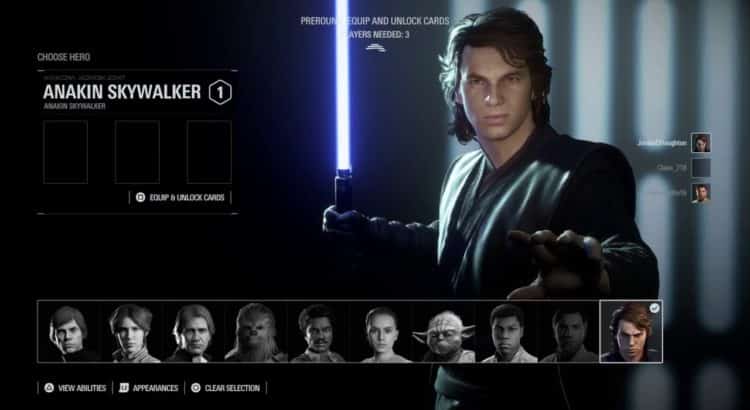 Here are the full patchnotes for yesterdays game update for Star Wars: Battelfront.

There are big changes coming to the Clone Trooper legions with each Trooper Class now getting their own look, relevant to the legion that they are a part of. This also sees the first time that Officers will be able to equip Clone Trooper armour.

Additionally, there’s been a lot of discussion around stuns and their effect on the flow of gameplay. With stuns now having a lower duration and a short immunity once you have been stunned, we’re looking forward to seeing how these changes improve the experience.

Anakin’s power and skill were virtually unmatched, though his overconfidence and anger could get the better of him. Even still, when innocent people were in danger, he would never hesitate to put his life on the line to save them. When his friends needed his help, he would not abandon them.

Under the new system Troopers will be visually different from one another, but all the while retaining the overall theme of their specific legion.

What this means is a Heavy will have different markings to a Specialist (and Assault and Officer), but you will still be able to tell which legion they belong to. This also means that, for the first time, Clone Trooper Officers will have armored Appearances.

This division of elite troopers were designated to protect the capital of the Galactic Republic and are identified by the red markings across their armour.

They could often be found patrolling the streets of Coruscant while also had the responsibility of protecting buildings of high importance. As the war progressed, the Coruscant Guard would go on to find themselves serving as bodyguards for members of the Galactic Senate and even the Supreme Chancellor himself.

Perhaps the most well renowned Clone trooper legion, the 501st Battalion led by Anakin Skywalker and Captain CT-7567, more commonly known as Rex, fought across many of the biggest and most important battles of the Clone Wars. Though they had the same hearts and the same blood as all their brothers, their minds were sharpened by the diverse battlefronts they fought across.

You can read more about the Clone Trooper appearances, 501st Battalion and the Coruscant Guard here

Emotes have always been a fun addition to the game and we’ve all seen how much you enjoy “Hello There”. Fun aside, they can also be a useful social mechanic in order to quickly communicate with your squad and nearby players.

The inclusion of a new Emote Wheel, with the ability to contain up to 8 emotes will allow you to better communicate with your team.

One piece of feedback we’ve been reading is in relation to the stuns that can be applied during combat. We agree that some of these stuns are too long and have made some adjustments accordingly.

In addition to this we will be implementing a stun immunity to all hero abilities for 3.5 seconds, specifically when being stunned by either Phasma, Iden, Chewbacca, Emperor Palpatine, or Lando. What this means is that should you be stunned by one of the listed heroes above, you will not be able to be stunned again for 3.5 seconds.

CHANGES TO CLASSES AND SPECIAL UNITS