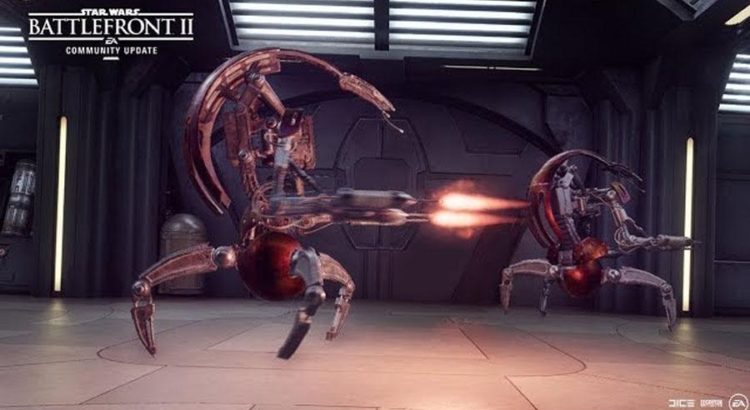 Here are the patch notes for tomorrows Game update in Star Wars: Battlefront.

Arriving this week will be one of the most requested additions to Star Wars™ Battlefront™ II, the Droideka.

One of the most feared droids finally joins the Separatist army, wielding twin blasters and personal deflector shield generators, making them a formidable foe for anyone that faces off against them in combat. Destructive weaponry and a powerful shield aren’t their only characteristics, as the ability to transform and swiftly relocate has become synonymous with the Droideka.

The TX-130 will provide the Galactic Republic with an armored fighting vehicle that is both quick and defensive. The speed allows the TX-130 to enter into battle, deal damage, and then make its escape; a great balance between agility and power.

This month we’re bringing Capital Supremacy to Naboo. The conflict has spread to the capital city of Theed, one of the most iconic locations within the Clone Wars and a fan-favorite map.

When you deploy onto Naboo, you will notice that it’s set at dusk. The embered sky adds a greater layer of atmosphere to the city. Alongside the dusk setting, you’ll notice that the city streets are showing signs of previously fought battle and skirmishes; romantic ambience meets war-torn streets.

The entirety of the battle takes place within the city streets itself, making Naboo a great location for those wanting to experience urban conflict from within the Star Wars universe.

This iconic look comes out of the crucible of The Clone Wars animated series from Anakin’s many fights throughout the galaxy. During the height of the conflicts between the CIS and the Republic, some Jedi opted to wear armored robes and gear versus more traditional robes to protect themselves in the heart of battle.

The General Skywalker appearance will be available on the 26th of June for 1,000 crystals or 40,000 credits.

The 212th Recon Division was outfitted with the angular Phase I ARF (Advanced Recon Force) armor and desert camo during the Second Battle of Geonosis when the Republic invaded the retaken world. Obi-Wan Kenobi (along with Anakin Skywalker and other Jedi Knights) led the siege with his loyal troops through dunes, canyons, and caverns of the Separatist-controlled planet.

The 41st Scout Battalion was under the direction of Jedi Grand Master Yoda. The 41st Scout Trooper’s armor, though featuring less plastoid plating compared to the traditional clone armor, allowed for greater mobility and flexibility in jungle-rainforest environments. The sunshield, wider visor, and overall shape of the helmet also help with vision when traversing or fighting in rainy foliage and wet regions.

Community Request: Adjusted the values of Health on Defeat Star Cards to be consistent across all heroes. Heal values upon defeating enemy heroes have been changed:

CHANGES TO CLASSES AND SPECIAL UNITS